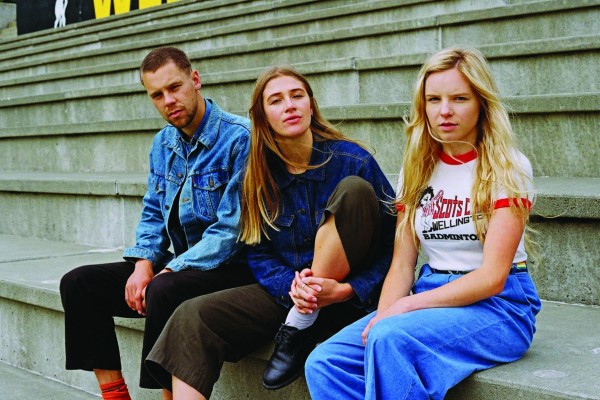 Despite their absolutely adorable name, the Mermaidens epitomize the gritty, hypnotic, kickass sound you always knew you needed but never had the guts to try.

They've been around for a few years, and their style is just… so fricken cool. There’s no other way to describe it. The band consists of three talented musicians: Gussie Larkin, Lily West, and Abe Hollingsworth. In 2014 they debuted their first EP, and in 2016 their album Undergrowth was released to critical acclaim, and resulted in the band signing on to Flying Nun records.

Last year was big for them. The Mermaidens released their album Perfect Body and opened for Lorde’s Melodrama tour in Dunedin.

Jess Thompson Carr had a chat with Gussie about the band’s material and development as a powerful creative unit.

Perfect Body is such a stunning album, can you tell me a bit about the inspiration and creation behind the record?

It’s kind of hard to remember now haha, we’ve been so absorbed with our new material. We recorded Perfect Body over a few months, the year before it was released. It was kind of written as one body of work, which was a really different way of working for us because previous albums have consisted of songs we’ve been playing for years. It was really nice to focus on one world, and the themes and sounds that made up that world.

How long did it take you to make the complete album?

I guess a lot of the songs had been floating around for years, but the matter of putting them together took about 4 months. It was cool to have that time to reflect.

How do you feel about the record you made last year as opposed to the music you are making now? Has there been a lot of development/change?

I feel like every piece of music I put out is kind of what’s happening at the time of recording it. My level of technical skill and what I’ve been listening to has a lot of influence. And what we are making now I think will really surprise people. We’ve really got intentions with the criteria the songs have to fulfill. We’ve actually got 5 different words and each song has to have an element of those criteria, which is a fairly formal way of working. As an organised person I quite like that. The stuff we’re working on right now is more pop-y and we’ve trimmed the fat quite a bit. More hooks, but still pretty weird…

When can we expect to hear your new work?

We’ll be finished tracking by the end of July, but then there’s mixing and getting the records made so I think this summer will involve releasing music and hopefully doing lots of shows. Then next year around May or June I think you can expect our new album!

We hope you’ll come back to perform in Dunedin sometime…?

We’ve had really good experiences in Dunedin and the South Island in general has been really good to us!

What is your opinion on the New Zealand music scene?

It’s a bit of a rabbit hole that question… I’m learning more and more about the music industry in general. The music business can be a real struggle to get your head around. It can be pretty frustrating seeing what trends people can latch on to in music and I’m really trying to stay away from it all because it can be really distracting… Spotify and media-wise… we do have a really special music industry. It’s so far removed from the epicness from the US and UK… we can go off and do our own thing here. On one hand it’s kind of a curse we don’t have that level of professionalism, but on the other there’s more freedom. Just get your mates and go make some music, y’know?