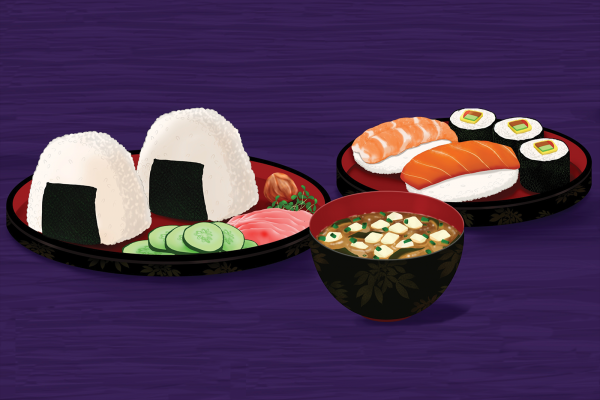 The rice ball was warm. Weird. While abnormal for sushi, it was not altogether unpleasant. It’s also a sign that they were probably very freshly made and didn’t have time to cool down, so that’s a good thing.

The rice was a flavour explosion, and it was moist enough that it arguably didn’t need any soy sauce. Which is a bonus, because they charge 10 cents per soy packet (outrageous!).

The chicken was a winner. Well marinated and succulent, with a very generous helping of sauce.

It was the second largest of the balls we reviewed, and at $3.90 makes for a pretty sweet lunch deal.

The Union Grill was once supported by a diverse selection of food court options. Over the years that has dwindled right down to a sole sad shop, Wasabi: the sushi shop that doesn’t sell wasabi.

Rice balls here will run you an even $4. They’re slightly smaller than a Sushi Station operation, but the rice is mushed together really hard, so there may actually be more pure food per dollar.

The chicken was dry and tough, overall pretty unappetising. They also produce an absurd amount of Teriyaki Salmon rice balls, which no one ever buys because they’re terrible.

Wasabi did make up for its terrible chicken with a big old squirt of mayo in the middle to moisten everything up. It also gets points for being the only place to offer avocado as standard rather than as 50 cents extra.

Stuck between The Cook and Kiwibank is a mysterious wee sushi joint with no name on the storefront. To its fans it has just become known as “that sushi place across the road from The Cook”, which is a bit of a mouthful.

The receipt reveals their registered name as Savoury Japan.

The rice balls here are fucking massive. Like, feed a family of 5 massive. Unfortunately, you do pay for size, as they come in at a bank-breaking $4.90.

The chicken was shredded, possibly from a can. Boring. The sauce was pretty light too.

The rice was bland to the point of being barely flavoured. Luckily, they give you as much soy sauce, mayo and ginger as you want, so that can help make up for it.

Tokyo Express is by far the cheapest of the lot, coming in at an amazing $2.50 per ball or $3 with avocado. You miss out a little on size, being the smallest rice ball that we reviewed, but it was a yummy little morsel. The Crispy Chicken is far superior to the Teriyaki, which was rather lacking in sauce. Like Sushi Station, the rice was flavoursome enough to not need any soy sauce, which was a bonus.

The rice was different to any other we experienced. Rubbery, glassy even. Good though, because you don’t end up with a weird white mush, but maintain distinct grains.

Overall a top-notch ball, particularly if you are very poor or very small and don’t need much food.