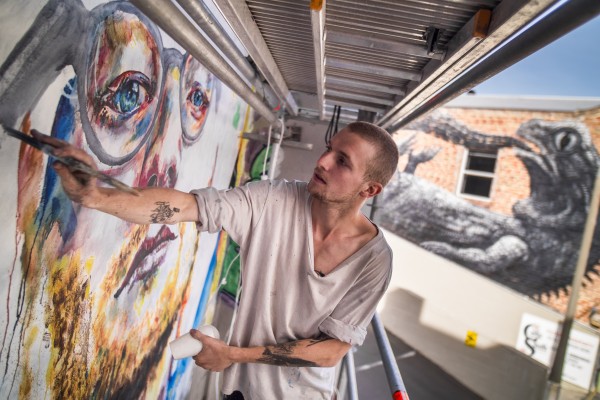 The Man Behind the Mural

Artist Tyler Kennedy Stent had the privilege of becoming the ODT flavour of the week, as criticism regarding the appropriate distribution of taxpayer funds to pay for an Ed Sheeran memorial absorbed front page headlines. The mural, immortalising the pop star’s visit to the city during the Easter holiday this year, was reported to have cost Enterprise Dunedin $8350, leaving the average ratepayer $0.15 down and visibly outraged. Controversy plagued the week that Stent spent constructing his Bath Street masterpiece, with interjections from media personalities, suggestions to paint a “giant cash register” instead, and distasteful comparisons to local murderer Clatyon Weatherston.

We sat down with Tyler on the Dunedin Public Art Gallery Late Breakfast show on Radio One after the week wound down. He admitted he was tired and had neglected to keep up with study and other commitments. However, he was incessantly grateful for the publicity received as the media swarm piqued public interest. “Everybody likes being appreciated for what they do, and I think for a lot of artists out there, that means working for a long time without acknowledgement,” he said. “Artists have the stereotype of being bums, you see us walking down the street and there's paint all over us, we look terrible! We work hard and we often don't get credit.”

Stent describes his first concept design as “absolute rubbish. It was a really bad sketch, he had his hands up behind his head, and I scribbled in the lion tattoo on his chest but then realised after I sent it to them that it looked like it was his legs. He was kind of starfished out naked and posing, but they accepted it.”

Stent himself was not responsible for the subject matter. The decision to paint an Ed Sheeran mural was made by the Dunedin Street Art Trust.

When posed with the question of whether he thought the preliminary negative media (which softened as time went on) would be a setback to publicly funded art within Dunedin, he was adamant that it wouldn’t be. “It's just a picture. For everyone to get so personally offended by it, I thought that was unnecessary. In the end, the council knew what they were doing.”

“To put it into perspective, someone told me that to put a speed bump up it would roughly be the same amount as the mural.” He went on to add that, “what people forget is it's not just a payment for the artist to go and do it, paint costs a lot of money! I'm a watercolour artist and watercolours usually aren't used to that scale. There's primer and varnish and scaffolding; it costs a lot.”

A surprising comment from Breakfast host Hayley Holt revealing her dwindling desire to visit Dunedin after the mural was completed knocked Stent harder than the rest of the drivel. It resulted in the addition of a love heart tattoo with Holt’s name in the centre, immortalised on Ed’s arm. “I was unreasonably offended when I heard about that! Apparently, afterwards she said something about how she was on the wrong end of 35 and single, and maybe that's why she can't relate to Ed Sheeran’s soppy love songs. I felt quite bad, and it made me think maybe I've gone too far,” he laughs, clearly proud of his decision to utilise his artistic agency. However, the comparisons to Clayton Weatherston, who murdered Sophie Elliot in 2008, put a damper on the situation.

You may have already been familiar with Stent’s work if you consider yourself a café connoisseur within the heart of the city. Two murals by Stent can be found at both Morning Magpie on Lower Stuart Street, and Wolf at the Door on Carroll. The planning of the indoor murals is much the same as on the street, but the execution is where the art form shines.

Stent humbly admits “I'm not confident with street art, though it is huge to me and I widely respect people who can do pieces to that scale,” forgetting that he just completed a piece very clearly to that scale.

Stent continually worried that the underlying motive pervading his art would be lost due to the negative Ed Sheeran press. Prompted about his connection to Nepal, he was quick to mention dedicating all of his work to expose the damage Nepal experienced during and after the 2015 earthquake. In fact, he said of the Bath Street mural “if it were up to me I'd be painting Nepalese children on the walls.” While travelling in Asia, he met photographer Lachlan. Lachlan had been living in a tiny Nepalese village devasted by the earthquake. He formed a strong bond with a family who had lost their father and lived with a mother who had breast cancer, no house and four children. Lachlan and friend Ash spent eight months building a house from scratch while photographing the family. Stent began to seriously paint the photographs, and people were impressed. “The first exhibition was called “The Spectator” and was more from our perspective being the traveller and stumbling into families, atmospheres and communities where there's no place for you, but you’re just accepted. You embrace their life, and you are a spectator to that style of living.” He plans on living in Nepal for a year, “turning everything we've just done and putting it back into the people that live there,” after seeking representation at a reputable London gallery.

Before jetting off, Stent has one more piece of street art in the works. “There's a piece that the Street Art Association and I are talking about, but it's a toss-up between two artists right now. I'm not sure if I'm allowed to say, but they’re both from Dunedin, and the point is to chuck a Dunedin person up there as well!”