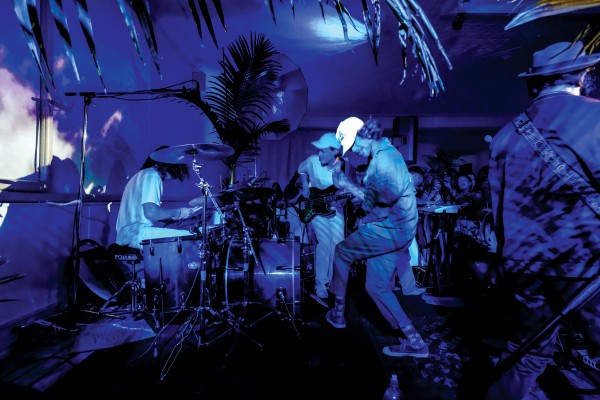 The Shambles: Our Energy Is Not Manufactured

Ask The Shambles “how was your summer?” and whatever you did will be put to shame. From December to February the Dunedin-grown band road-tripped the length of the country, rocking the socks off audiences and accepting gifts of corn as they went. Critic caught up with front man Max Gunn a few days after their final gig for the summer.

Critic: You guys always bring so much energy to your gigs, even when you’re in the midst of all the travelling. How do you get hyped for your gigs?

Max: We’ve got some funny little routines. Frisbee is a big orb of energy for us, we very often toss a disc. The guys are all pretty young and energetic. I’m 24 but the other guys are a few years younger so I feel like an old man. They all have so many beans, so much energy, they just bounce around. Alongside youth and frisbee we just love making music. Our energy is not manufactured, we just genuinely feel inspired by the music that the guys around us are producing. Even when you’re physically wrecked, a very weird spell seems to be cast on you when you find yourself on the stage making music. I’ve definitely never felt like sleeping on stage.

C: What’s been your favourite gig?

M: Oh man, I really don’t know. This tour was such a joy. Rhythm and Vines to start off was pretty incredible. We’d been on hiatus for a long time and it was the big comeback gig. As the clock struck the New Year we were playing. It was like slow motion, looking around with champagne firing into the crowd, fireworks, and you’re at Rhythm and Vines with some of your best buddies dancing on stage with you. That was pretty fantastic.

C: Can you tell me about the origins of The Shambles?

M: The OG Shambles, we all were studying in Dunedin. I was living on Castle Street and friends of friends started whispering that me and Connor, the drummer, should start jamming together. We didn’t really know each other but among our friends we were the two guys that liked making music so we got ushered together. Drum and bass was quite big at that time, certainly in North Dunedin, so he and I began a two-piece live drum and bass act called Sticks & Bones where I was on synthesisers and singing and he was on the drums. I think the only reason we started with drum and bass was because we got offered this opening act to play for Brooks Brothers, who are an international drum and bass act. We got this gig and thought ‘fuck, I guess we’ll have to become a drum and bass band’. So we did. We spent a few weeks together coming up with a set and then slowly we played heaps of twenty-firsts and various musicians came out of the woodwork and joined us. We all lived in one flat, it was this big flat with 20 people in it and all the musicians were there and so it changed from drum and bass to The Shambles which is quite eclectically influenced. It was sort of one of those organic Dunedin movements where a bunch of musicians flatted together and started making music and playing and some demand came and people enjoyed the music and it just grew and grew. We’re an OG Dunedin thing.

C: Another origin story – where did “Corn on the Floor” come from?

M: I don’t know if I want to tell you because of the mystique . . . but I will. Corn is the nickname of Connor, the original drummer. He’s a very chill dude, very relaxed. One of my all-time best friends. We used to throw some severe parties and he’s usually the guy who just chills on the couch. One night I came home at probably 4 or 5 in the morning and there was some heavy disco-house music playing. We walk into this huge living room, everyone else has carked it on the couches, but for Corn on the floor who is just like a woman possessed. He’s crumping . . . I’d never seen anything like it. It left a huge impression on me. We picked up our instruments later that week, found a whack riff and inspiration from Corn’s outrageous movements. It didn’t involve a whole bunch of frozen mixed vegetables. Although we did used to have some weird parties.

But now, it’s turned into this weird cult thing. It has a cult following now where people bring corn to our gigs and throw corn around and eat raw corn and we throw corn into the audience and drunk adolescent people smash raw corn. It’s really bizarre. Because Corn the person is such a chiller it’s just so funny to have a cult being slowly built around him. He’s so chill and oblivious toward it. We had a gig in Christchurch and, unbeknownst to the band, someone made heaps of band merchandise where they photoshopped Corn’s face onto these sweetcorn cobs made out of plastic cardboard with dreadlocks super-glued on. There’s these incredible photos of the whole crowd holding up these huge pieces of corn with Corn playing the drums looking confused. It’s wonderful.

C: How do you find it now that people might recognise you on the street and know your music?

M: It’s pretty chill. The sickest moments so far have been after gigs when young musicians have come up and explained that watching us made them feel like they could follow music themselves. That’s pretty profound. It’s pretty epic to be validated in the sense that you’re making other people want to do something as special as music. Recognition from people is something I’m still getting my head around, when it happens. But it’s lovely that people want to give you some energy back for the energy you give out.

C: What can we expect from you guys in the next few months?

M: We’re doing the less sexy part of the music-making at the moment – all the planning and behind-the-scenes stuff. But it will involve (a) some stanking music, (b) some shows, and (c) heading overseas. It’s exciting times.