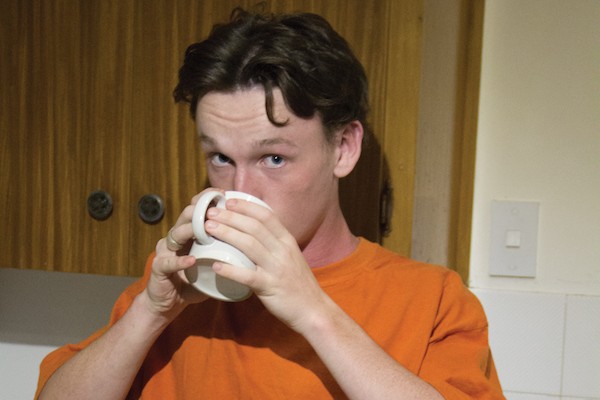 Sitting with Christian Tucker - Dunedin’s answer to Chance the Rapper

Christian Tucker is Dunedin’s answer to Chance the Rapper. That may seem like a radical claim, but the production quality, the lyrics and the performance on Tucker’s new album “Intro to Orange” leaves little to be asked for. The local poet performs weekly at the Dog With Two Tails, Inch Bar, and Zanzibar to keep his edge. Not that he’s got a lot of competition; the kid is miles ahead of his contemporaries. Hell, how many 2nd years do you know that would sit “virtually naked” in their wardrobe in 40 degree heat to record and write an album? Not many. But that’s Tucker to a T. He’s a resilient and determined writer who knows that you’ve got to work and work a lot. He’s willing to get out there and make a fool of himself. After a stint in Wellington, Tucker is back in Otago, restarting Uni, taking Theatre, English and Law. The guy’s found something he’s good at, and he’s just going to get better. Tucker’s got a lot to be proud of. I mean, Jesus, we only just met the guy and we’re fucking proud of him.

Jess and Zoe: When did you begin combining poetry, with music, maybe rap? But mainly poetry with music? How would you define what you do?

Christian: I was kind of hopping grounds a little bit, you know. I was one of those cringe 11 year olds who write something like Eminem lyrics. Like mum would tell me off and I’d go upstairs. So yeah, that’s really how I began. At school in English we were doing Shakespearean sonnets and I wrote one to submit for a poetry competition. I was so bad at it. I just sucked at that high school ‘by-the-line’ stuff.

C: Yeah exactly. But um, the teacher was like, “you should submit to this competition”. Not to me specifically, but to the whole class. I went to go submit and realised that you had to submit two poems to be eligible for the competition. So, I wrote up a second one. Literally in 15 seconds, taking the piss. And I get an email two weeks later, and what’s the poem that’s won the competition, but that 15 second one. It was an Otago competition so I ended up going to this high-dinner/ball thing, with suits and dresses, and I was like whoa, this is too much. But I also found out that doing this stuff is fun and rewarding.

C: Yeah exactly. There was a slam poetry competition that started up that year, and I won that with “The Little Drummer Boy”.

J & Z: Which is amazing btw – I cried (during a live performance that Tucker gave because the Wi-Fi in the Critic office is shit, and this kid has balls). And that got you to nationals?

C: Yeah for spoken poetry. I got flights paid to Auckland and it was cool that poetry turned out to be something rewarding, and something that is kind of niche.

J & Z: Yeah that’s so cool! Not many people that we talk to have been rewarded through poetry!

C: Well everyone makes generalisations, that I’m pretty much just a rapper, and honestly, I just wanted to stray so far from that. I just didn’t want to be a white guy that raps.

C: Well yeah, but after high school in 2016 I moved to Wellington to pursue that. Did a few competitions and started getting offered jobs in bars. It just kind of felt that study would be better here, so I moved back down [to Dunedin]. I’m loving it.

J & Z: Would you say that rap does influence you though? Any artist or styles of rap that you are interested in?

C: Not really any more. There’s this poet, Harry Baker, he was the international slam champion. His stuff is more positive, and not to bash the art form, but people often use poetry as an excuse to get out there and sop. To be honest I don’t get that, I just want to write happy poems you know. So yeah, that’s why the album is about love and stuff. And people love that.

J & Z: And it’s kind of a cultural thing in NZ to complain about shit, it’s way easier to talk about something that is negative.

C: Yeah, we were given a quote in theatre yesterday: “it takes talent to make art, but artistry to spread happiness”. It sounds really pretentious, but you know…

J & Z: Tell me a bit about your album, anything about that, and your process?

C: Well, I went to Wellington to do poetry and everything, but I ended up repeating poems I’d already done from high school. It’s cringe going back to that old stuff, some poems get really outdated, like “The Little Drummer Boy”. I was doing these old albums, and I had a girlfriend who I moved to Wellington with. But we broke up, and I was in the pits bro, it got me bad. I couldn’t write anything. Some months later, I was talking to a mate, Ben Rainey, we went into his room and he has all this equipment. It turns out that he professionally makes beats. He was like, bro I’ve got this beat and I know you write some poetry, surely we can just merge the two. And I was like, all right, I’ll give it a shot and it actually went well. He played me a beat and I died, I dropped to the floor. And that’s now the first track on the album. How easy is that?

J & Z: Did you work with him on the rest of the album?

C: Ben’s got a few more beats on there. In summer I went back home, and that’s where you see the ODT article, of me in my wardrobe, in my defense you get a real dry sound in there.

C: No! Thankfully! That was the most embarrassing thing of my life. Those were the 40 degree days. I was in my room, pretty much naked, recording for the album. My mate James Phizacklea, he does the guitar and sings the chorus. The album slowly came together. I think I did over 50 songs, only the best eight made it on the album.

You can find his album “Intro to Orange” on Spotify and buy it on iTunes (just fucking buy it). Honestly, check it out. Insiders tip, the album is in reverse, so listen to it right way around and then back to front. Our favourite songs are “Writers Block” and “Live For,” and we’ll be cranking it when we have our staff booze review later tonight.

Special shout out to rhyming “I need this” with “Jesus”. Too true mate. Too true.