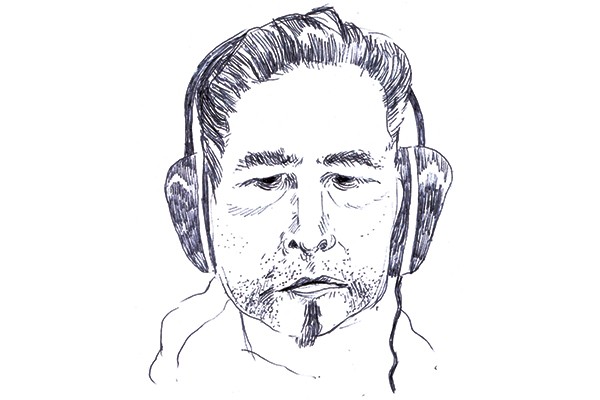 Legends aren’t born, they’re made. The legend is made of memes and called Darude, the man behind the cultural classic that is ‘Sandstorm’. This is the journey I undertook to see Sandstorm live.

Darude was playing one New Zealand concert, in Christchurch. Why Christchurch? He moves in mysterious ways. Radio Hauraki was so hyped they bought out all the tickets, and I managed to get my hands on one. In addition to winning a ticket, I had won a seat on the frothing party bus that would transport us up to Christchurch and back, for “Da Road Trip” experience.

Da Road Trip began at the Dunedin Railway Station on a Wednesday morning. Keen to escape the rain, I joined the line of lads filing onto the ‘Happy Days’ Dunedin tour bus. I chose the exit aisle (just in case), and the extra leg room, though wasted on me, was much appreciated. Just as I was wondering if it would be an all male ensemble, the girls arrived, touting blankets, snacks, and peppy morning attitudes.

Everyone was ready to have a bizarre experience. “Cheers guys, and welcome to Da Road Trip. We got you guys all a Darude singlet. We’re gonna pick up some booze on the way.” We were given a choice of three singlet colours: green, pink or orange. I went with green.

Optimistically I had brought some university readings and a hefty copy of Middlemarch. The crackling speaker static from the bus radio warned me that reading might be difficult. The radio failed, but someone pulled out a bluetooth speaker and the party was back on. Sandstorm was blaring before we left Dunedin, and I bookmarked my novel.

Ten minutes in, we all posed for a ‘Snapstory’ photo to “get the fizz going for social”. The fizz was certainly flowing on the bus, with DB Draughts sneaking out of black Liquorland bags and people getting social.

We stopped at Timaru’s KFC. The order was brought out to us, as the KFC staff probably didn’t want forty students in their store. We ate on the grass beside the parking lot, wearing our Darude singlets with aggressive pride.

In Christchurch we were dropped off and left to our own devices. Sad to leave the party bus, I had about four hours to kill until the gig and opted to sit in Southend Mall, slowly eating my leftover pizza, until the janitors took my seat away from me for cleaning purposes.

I tried to walk around the New World for a bit, but I was a visible lingerer and kept getting in the way of shopping trolleys. I ran into some friends from the party bus, and headed back to their hostel to kill some time. They sat silently and did their university readings while I read some more Middlemarch.

I turned up to the club at 8pm. That was my first mistake, as I learned that the main attraction, Darude in this case, never starts at the same time the gig does. You live and learn.

We were treated to remixed hit tracks by the in-house DJ (Spotify Premium), bangers like  ‘Jump’, ‘Golddigger’ and ‘Hollaback Girl’ making an appearance. One woman vehemently whispered, “how can they play this SHIT before Darude?” The music felt appropriate. If nothing else, it would make Darude better by comparison.

I’d arrived with my backpack and overnight bag, and had to wheedle the door girl to let me store my stuff under the register booth at the front door. I was not going to experience Darude with a backpack full of toiletries.

I swayed and meandered in the harsh black and red glow of the nightclub. There was nothing to do, and I regretted not pre-drinking. Everyone in the club was wearing a Darude singlet. Radio Hauraki had also given out glow sticks and other light up things, but I’d somehow missed out on those. Seven people were clumsily dancing.

At 9.30 there was rustling up in the DJ tower. A changeover was happening. A man wearing a snapback emerged, tailed by bodyguards, and started to set up DJ equipment. This must be Da man, Da myth, Da legend, Darude. He was taller than I’d thought, and didn’t look as old as I’d imagined. Perhaps cultural icon status keeps you young.

There was a little swarm of people to the side of the DJ booth clustering for a photo, so I went up to get my slice of the action. I stood at the edges with large eyes until I was beckoned forward by Darude’s thick fingers. Lying through my teeth, I told him I loved his work. I got my pictures and retreated as he began to play.

I beamed at my photo and chatted with my mate about the life changing experience I’d just had, and how Darude’s accent sounded a tiny bit Kiwi. But, as it was my first Finnish accent, I took it at face value.

The club was still half empty. Darude started playing his set, and the crowd let him know exactly what they wanted. “Sandstorm” was enthusiastically screamed every few minutes as the crowd mindlessly bobbed to the vaguely rhythmic beats. It is hard to dance to techno tracks that have no build.

15 minutes passed and there was still no Sandstorm, or anything recognisably Darude’s music, which isn’t saying much. I turned to my mate. “Do you think that guy might… not be Darude?” I google imaged as fast as my data would allow, and compared the images to the DJ’s face. It definitely wasn’t Darude. It was a tall white DJ in a snapback, and we had all been duped.

The realisation hit me. We weren’t here for Darude. No one knew who he was. We were here because of one song that made his career, and didn’t even know what he looked like.

With nothing else to do but wait, I tried to assimilate and dance in a casual and inconspicuous way, which required a lot of concentration. I hope that didn’t translate into a look of constipation, because my dance facials need some work. I kept jotting notes in my notebook, a weird thing to do on the dance floor, but the crowd only had eyes for Fake Darude.

I was getting frustrated. I had been standing and waiting for over two hours; I was hungry, and I just wanted to sit down.

At 10.30, after hours of teasing, the real Darude arrived. We went wild.

After Sandstorm was released in 1999, Darude apparently went on to make more music. Who knew? Certainly not me. But we were all going to listen to it, whether we wanted to or not, as Darude launched us into the average DJ tracks of the rest of his career.

After listening to the fourth track that wasn’t Sandstorm, the crowd grew restless. They had been loudly requesting Sandstorm from the get go, but the hype was fading and frustration was setting in. Darude looked wizened beyond his years as he faced the yells and demands with a thin, grim smile. This must be every concert for him. It made me feel a bit sad for him, but not sad enough to dissipate my frustration. I was bored of pretending to be interested in sub-par tracks.

I had brought foam earplugs in anticipation of the noise levels. This was my best choice of the evening, although I did have to constantly check they were hidden behind curtains of hair. With the deafening noise slightly muted, I elbowed and burrowed my way into the mosh pit.

Darude knows what he’s doing. He basically edged us the whole night, playing tracks that had very similar motifs and beats to Sandstorm, only for the song to veer off into some unfamiliar and less interesting beat sequence. Perhaps it was the only way he could regain power; by playing dirty with our expectations and our hearts.

With my body sandwiched between sweaty men, I gazed up at Darude’s aging jawline, my hands reaching for his attention. I knew my efforts were futile. Then Darude, wise Finnish Santa, made my wish come true. He reached out and held my left hand for a solid seven seconds. His grip was warm, firm, decisive and full of whispered stories. Even when he let me go, my hand continued to feel his touch. I resolved to never wash that hand again, but then a drunk man dribbled on it.

The rest of the night was blurry, as I’d figured out that the best way to get through the night was alcohol. Darude never played Sandstorm. Da Rudeness of it all. He did play a remix of Sandstorm, diluted with new, irrelevant crap, but most of the club was too drunk to notice. I stayed until Darude finished then wormed my way through the sticky dance floor into the cold Christchurch night, calf muscles aching, heart a little bit broken.