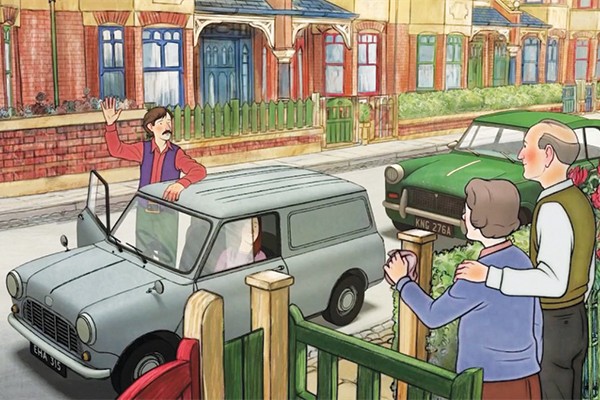 What a nice film. Ethel & Ernest is an animated film based on a book by Raymond Briggs, the author of a number of beloved ‘80s and '90s children’s picture books, about the lives of his parents, milkman dad Ernest and lady’s-maid mum Ethel, voiced superbly by Jim Broadbent and Brenda Blethyn. The film follows their experiences, both big and small, as an ordinary London couple from 1928 through to 1971. They endure the Second World War, listen to BBC Radio over cups of tea, sing cockney songs and build double-decker buses out of crumpets (they don’t actually do that last one, but you get the idea - they’re very British).

It’s great to see the old hand-drawn style of animation on the big screen again – it feels like we haven’t had much of that in recent times. The film looks terrific, bringing the classic childhood-storybook aesthetic of Briggs’s illustrations to life wonderfully.

It isn’t all hugs and sunshine - some of the war scenes are quite intense, and it’s definitely a film for adults as much as kids. The post-war section of the movie is quieter but, heads up, it becomes quite a tearjerker towards the end. Not gonna lie, it made some tears come out of my face.

The film deals with universal themes of love and family, but is also a portrait of a particular place over time; I suspect that the mileage people get from the film might partly depend on how much of a connection they feel to the UK. As someone who has lived there in the past and has a British parent and relatives, the film felt close to home (in a good way) - but for viewers without those associations I can imagine that it could get slightly boring at times. Even for me it dragged occasionally, but the consistent warmth and charm definitely make it worth seeing. Lovely movie.