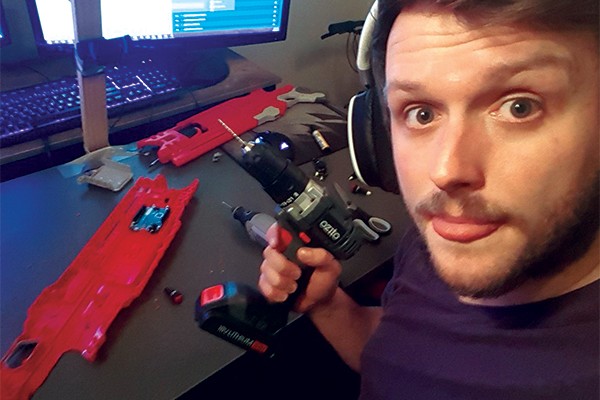 Dylan Beck is a good friend of mine and I got to know him before he became Rudeism, a Twitch stream extraordinaire who has over 35,000 followers and can turn anything into a videogame controller. I sat down with him to ask about his newfound popularity and creative genius.

When did you start streaming on Twitch?

Mid 2015. Hearthstone was my main game, and I tried to be all pro at it, wanting to go to competitions and stuff. I soon gave up on that because the game got a bit too random for my liking, and no-one wanted to watch someone be terrible at Hearthstone, so I switched to Rocket League and tried to get pro at that instead. I did better, a few people would come by to watch, but it was pretty uneventful at that time, since it was always just me playing Rocket League normally with a controller.

Was it really exciting when one person would come into the chat and say hey?

Oh fuck yeah! It’s the most exciting thing ever! It still gets exciting when I see someone I don’t recognise. For months it was just streaming to two or three people at a time, so if anyone came in, it was a huge deal. Even if it was just a friend of mine.

And when did this all change?

In late October 2015, a friend of mine from high school was joking around that I should play Rocket League with a Guitar Hero guitar. At first, I thought it was really dumb, but then I was like well, if I could do it, how would I do it? So I started mapping out the buttons, using the accelerator as the whammy bar, use the strum bar to steer; the buttons on the neck could do a bunch of other stuff. The next night I got all the equipment to do it and got started playing. Playing like shit, but playing. My long-term goal was to just get an aerial goal. Fly in the air, get the goal. After an hour I got it by pure luck - I was screaming and yelling and it was awesome! I finished the stream, went to bed, woke up the next morning, and at the top of the Rocket League subreddit was a post that says, “Guy gets an aerial with a guitar hero controller” and I was like huh, who did that? Oh shit, it’s me! That’s sort of how I got my initial following.

Tell us about World of Dancecraft

After gaining a solid following of around 600 people on Twitch, a lot of people starting suggesting other games and ways of playing with a guitar. Then I decided, why not use other controllers? Stuff like a steering wheel to play Mirror’s Edge. Then at that point I started playing World of Warcraft with a dance pad and was determined to get to level 100. I was averaging 6 or 7 viewers a day and I also put the idea out to my 5 or 7 or whatever Twitter followers. Then I got a buzz on my phone about an hour into the stream and it said “@Warcraft has retweeted you!” and I was like ohhh here we go. Suddenly this swarm of people come into the stream from Warcraft’s Twitter and a whole bunch of popular streamers also caught wind of it. I went from around 800 followers to around 3000 on the first day of streaming. This is also when I just started, so a lot of people were like “haha he’s not going to get to level 100”. But I did! It took me about a month, but I did it!

So, there’s dance pads and guitars, what other controllers have you used and built?

I got my hands on a MakeyMakey and after that I’ve tried almost everything. I bought a whole bunch of bananas and played Overwatch. Used a Nerf bow for Hanzo in Overwatch. I’ve built controllers out of microwaves, teacups, I played Civilization with kitchen sieves, wired up my car to Forza, used a rocking horse in Overwatch. I hooked up an actual baguette the other day.

I love your enthusiasm for accessibility and alternative controls; can you talk a bit about that?

When I started, I never thought any of this would have any use outside of streaming for laughs. But I’ve since talked to people who now build controllers for accessibility and gamers who aren’t able bodied with physical disabilities. I’ve had individuals come up saying they have issues with gaming controllers but have been inspired because of what I’m doing! Which is super cool.