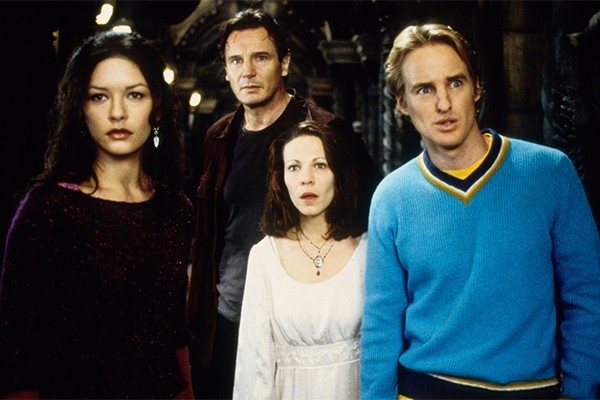 This is an… interesting movie. A late ‘90s entry in the Haunted House genre, it is imprinted in my memory because I vividly recall as a kid being torn between wanting to see it and thinking that it was going to be terrifying. More specifically, I remember making it as far as the cinema lobby before wussing out and convincing my dad to drive us back home. When on the third attempt I made it into the theatre itself, I found the movie was way less scary than expected - but still memorable, and enjoyable. Years later I found out that it was a remake of a classic 1963 film, and that it’s regarded as one of the worst and most unfaithful remakes of all time. Granted, it’s a different take on the material; the original leaves things to the imagination, never confirming for sure whether there are actual ghosts or if it’s all being imagined by the unstable protagonist, Eleanor. The remake keeps this ambiguity up for all of about two minutes before flooding the screen with CGI apparitions. And the CGI, while not Casper: A Spirited Beginning-level bad, is often pretty fake-looking. But despite not being very subtle or scary, The Haunting has a distinctive atmosphere, mostly thanks to the excellent set-design; the house’s exteriors are Harlaxton Manor near Nottingham, while the interiors are studio sets, and both look amazing. Another strength is Lili Taylor’s performance as Eleanor; even in the remake Eleanor is way more interesting and three-dimensional than your average scary-movie protagonist, and Taylor does a great job; particularly in the second act’s “Eleanor none of this is real”/“No it is real!” scenes - though these are stripped of some of their dramatic power since, as mentioned above, the movie has made it very very very blatantly clear that there are real ghosts by this point. The cast also includes Liam Neeson, Owen Wilson and Catherine Zeta-Jones. Overall, I’d recommend watching The Haunting, but given how many critics hated it, feel free to take the recommendation with a grain of salt.