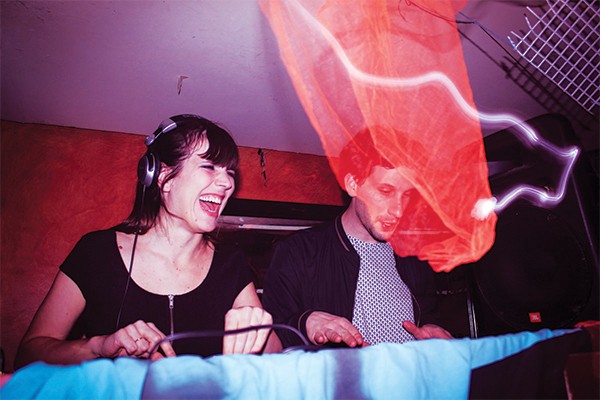 Gratis: A Q + A with Carisma

Carisma recently dropped their long-awaited full length album, Gratis. Out on Dengue Dancing Records, Gratis features nine tracks of heavily pulsed crunch beats, arpeggiated synths, delayed vox, and body-moving rhythms. True to its name, Gratis is a gift from Carisma to dancefloor lovers. Conjuring the spirit of the club, the album is dancefloor chaos at its most refined, the synth storm stabilised by meticulous production and relentless repetition of bass sequence and kick.

On the back of their recent tour, we caught up with Carolina Stegmayer and Ismael Pinkler, the creative minds behind Carisma, to gain an insight into their satisfyingly addictive debut album.

How did you become involved with DJing? Were you both performing solo before forming DJ duo, Carisma?

Before we started playing and making music together as Carisma, Carolina was playing as a DJ and Ismael was playing live and releasing music under his own name. During that time we were already sharing opinions and supporting each other's work, so the fusion was a natural process and it happened when we moved to live together in a very small apartment in Buenos Aires.

Do you remember your first live DJ set as Carisma? Where was it and how was it?

It was in a bar in downtown that it doesn’t exist anymore. It was very exciting! During that gig we got our next invitation to play at Dengue Dancing and that went on and on.

How was the tour?

The tour was an interesting experience. Living so far away from the Northern Hemisphere, sometimes we think that everything happening in the real world is reflected in the internet. On the contrary, playing and going out in Europe made us realise that experiences are fundamental and that it is impossible to have a panorama of what’s happening in today’s musical underground without being there. The same happens here in Buenos Aires; you need to go out to catch the vibe and we go out a lot!

What is the concept behind the album, Gratis? Do you see Gratis as a departure from, or an extension of previous releases?

Gratis means “for free” and the concept is that. It’s a present for people who like dancing to our music. Musically it’s not a contrast to our previous releases. As it is an album (our first album after a few EPs), it’s a more developed and extended musical journey. Some tracks are closer to pop, like the reggae-flavored ‘Soñándote’, the melodic ‘Pienso en vos’, or the insistent ‘Qué es Wave?’, which is the opening number. Others are pure club intensity, like ‘Con Sombras’, ‘Pool Fiction’, and ‘Suprema’. ‘Encaje’, ‘Imaginario’, and ‘Muy muy’, for their part, probe introspection, hypnotism and non-sense.

Are there other influences outside of the DJ scene that inform Carisma's live performances or the way you create tracks?

Music itself and musical experiences, such as going out to the club, are always our main influences, but we are very interested in contemporary literature, dance, and arts happening in Buenos Aires, and that filters into our music.

In a social aspect, our everyday life in the city has a big impact and influence on what we do. We live in a big and chaotic city from the Third World and, without being apocalyptic, sometimes it’s impossible to predict what will happen next week and even more difficult to plan in advance the next year. To have an organised plan of life with concrete goals is sometimes less realistic than to live each day without thinking about the future. Of course this context has an influence in our music that somehow reflects this state of mind, and, on the other hand, music is a shelter where we go and isolate from this crazy outside world.

Who is singing on the Gratis vocal tracks? Is it you, Carolina and Ismael, or guest artists?

All the vocals are from Carolina and we also sometimes use her voice as another sound element which is not always in the shape of words.

Are there DJs or artists in Buenos Aires that you are particularly excited about right now?

Do you have any advice for young people who are interested in becoming DJs?

Don’t be realistic. The present is ours. Do what you want to do and focus on your own tastes. Share your music with your friends and play it!

Gratis is available for free download from Dengue Dancing Records: