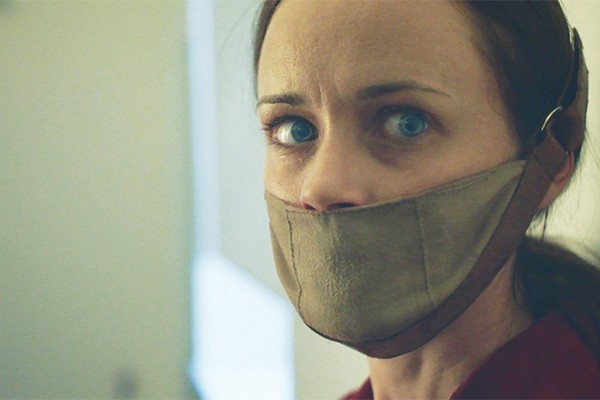 Based on the Margaret Atwood novel of the same name, The Handmaid’s Tale is a post-apocalyptic story of a patriarchal world. The first three episodes were released together and pack and powerful punch to the gut, with themes from the 1980s novel still resonating and relevant today.

Our main character, June/Offred (Elizabeth Moss), is a handmaid. She lives in a future where nuclear energy has ravaged the land, and human fertility is very low. From the glimpses the show has given we can understand the government and constitution was shut down following terror threats. A conservative religious cult then took over, revoking women’s rights to vote, to own land, work or earn an income. The main focus and goal of this new rule is to produce children. Fertile women, like June, are rounded up and trained, then are placed with commanders and their infertile wives. They are given a new name based on the name of the commander they are placed with, such as Offred. Once a month, during ovulation, there is a ceremony involving the husband, wife and handmaid. The desired result of this ceremony is to produce children, the handmaid being impregnated and then giving birth for the wife.

Highlights are the scenes with Moira (Samira Wiley), June’s best friend who we see only in flashbacks thus far; Mrs Waterford (Yvonne Strahovski), the severe wife of the commander; and Ofglen (Alexis Bledel), a lesbian woman from before, now labelled a ‘gender traitor’. All three of these actors bring forward outstanding and emotional performances.

The Handmaid’s Tale is hard to watch and is incredibly uncomfortable. It addresses a range of difficult themes and topics - some better than others. Through adaptation there are a number of changes to the story. Offred is made into a much more heroic and active character. In the original story she was tired, complicit and scared. The writers have upped the ante on many aspects, relying on shock and disgust to carry the show. Overall it is a good show, but perhaps a little too heavy handed at times.