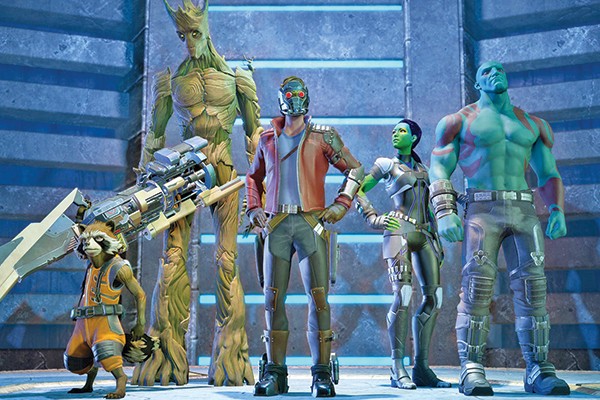 Guardians of the Galaxy: The Telltale Series - Episode 1

There’s something particularly exciting about a game that is influenced by your decisions. Telltale Games have definitely got this structure down, taking on stories from multiple different franchises such as The Walking Dead, Fables and Game of Thrones. This time around they’ve delved into the world of Guardians of the Galaxy.

We meet up with the familiar crew - Peter Quill, Gamora, Drax, Groot and Rocket - who are on their way to deal with Thanos. As per usual, the mismatched, ragtag team of criminals-turned-heroes is bickering while crashing. The group is attacked in space by Thanos, and follows him down onto a nearby Kree planet at the request of the Nova Corps. They find their way through into a temple, pass several dead Nova soldiers, and make their way to battle with Thanos - who is satisfyingly big, purple and arrogant. This is definitely not canon with the film franchise, and actually steps away from the current plots, instead looking into the Guardians’ world and exploring other possibilities. Mostly, the first episode is just setting the scene for the rest of the series.

One of the first things I noticed was the character design. Their appearance and their personalities more closely match the comics, but their costumes seem to fit the characters of the films. Each character is an amalgamation of both mediums, giving a different spin on these characters. The voice acting is obviously film-inspired, with the voice actors exhibiting the same kind of inflections that Chris Pratt, Zoe Saldana and Bradley Cooper bring to the table.

Gameplay is basically what you expect from any Telltale game - it’s plot and character driven, your choices and actions impact the story you are told, and action sequences are run like quick-time events. You have a couple of opportunities to control other characters, but mostly you play as Peter Quill.

After this first episode, it looks like this series has a lot of potential to offer some original character-driven storytelling without relying too heavily on bombastic action sequences. This episode is fairly short, sacrificing length for choice and replayability, but there’s a lot of heart, despite being essentially an episode dedicated to setting the stage for the rest of the series. Hopefully, Telltale delivers, as they have so many times before.