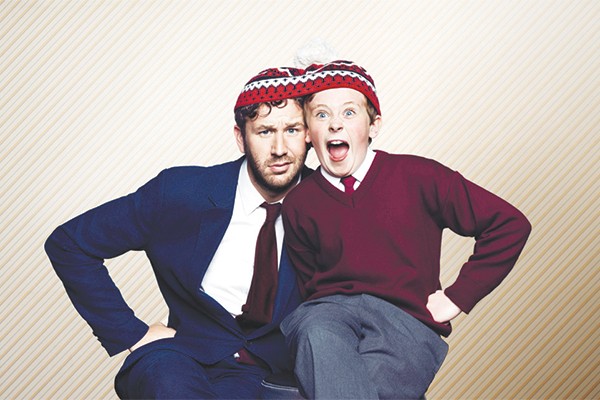 Moone Boy simply warmed the cockles of my heart. This show makes you want to sit in bed with a soft blanket and drink beverages from a thermos, even though you are literally in your house and could make a cup of tea.

But what is Moone Boy you ask? Is it about some type of boy on the moon? No, don’t be silly. This is a show about a slightly socially defunct 12 year old boy named Martin Moone, who is growing up in Ireland in the late ‘80s/early ‘90s, and his imaginary friend (played by Chris O’Dowd, who created this show and you may know from the British comedy the IT Crowd).

In Martin’s coming of age story he is surrounded by three antagonistic Irish sisters and slightly less antagonistic Mum and Dad who all partake in heart-warming hijinks. There’s just some great stuff going on in this show. In one particularly memorable episode, Martin surreptitiously starts creating a hole in the wall behind the family house because his sisters have started painting his face with makeup in the night. Martin refuses to waste precious sleeping in time before school and is somehow convinced if he dismantles the wall slowly enough nobody will notice…

I really didn’t expect I would enjoy a show about a 12 year old boy this much, but Martin is very endearing and some of the show’s techniques like animating Martin’s drawings, and addressing serious issues through an optimistic and childlike lens really gives this show a special charm. Chris O’Dowd hit it out of the park with this one, and the fact that many of the storylines are based on his personal childhood memories makes it an authentic viewing experience, you can tell this show is his personal creation.

So if like me you are avoiding watching depressing television because life has already given you a bowl of mouldy cereal this month, might I suggest a little Irish escapism?