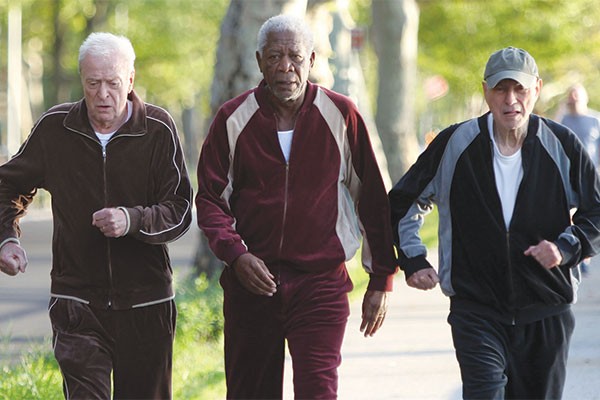 For a comedy this film made me really depressed. Even Morgan Freeman’s voice could barely lift my spirits.

Three retired gents have their pensions frozen by the company where they worked for 30 years. They can’t even afford to buy a slice of pie and one of them has a terminal illness. Getting old seems terrifying. Their lives involve playing bowls in the park, skyping their families and meeting at a diner for crappy coffee. So, naturally, they decide to rob a bank.

I have always been firm believer in the notion that if a film has too many well-known actors in it, it will be shit. Going in Style included the likes of Michael Caine, Morgan Freeman, Alan Arkin (Little Miss Sunshine), Matt Dillon and Christopher Lloyd (Back to the Future) and thus, unfortunately, already qualified for an average rating in my books.

The trio get help from Joe’s (Caine) ex-son-in-law who sells marijuana and points them in the direction of a criminal called Jesus who poses as a pet store owner. On a side note, cutest pug puppy ever features. Jesus orders them to get fit and helps plan the heist to a tee, cue montage of bank robbery prep.

Perhaps I am being too harsh, I definitely uttered a sprinkle of laughs here and there. There is nothing better than a douchebag character peeing his pants. It is just embarrassing how Zach Braff is clearly trying to show that the film is relevant and modern by having the old geezers smoke some weed and making one of them have loads of sex. Shocking.

Basically, I laughed more during the ads before the film began than during the film (I can’t wait to go see Pecking Order, a NZ doco about the Christchurch Poultry, Batam and Pigeon Club. Looks hilarious). Trying too hard Braff, sort your shit.