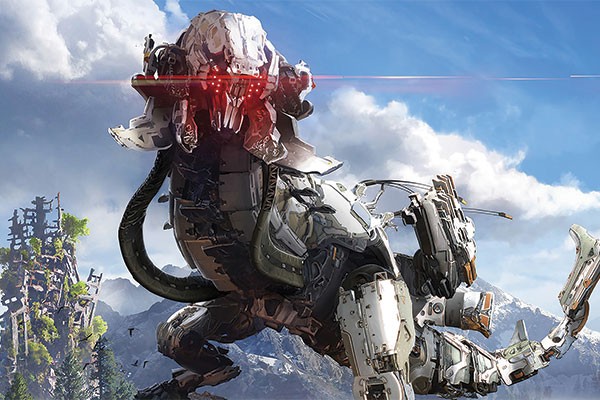 Made by: Guerrilla Games

Neil Druckmann of Naughty Dog recently sat down for a conversation with Hermen Hulst of Guerrilla Games, and asked him how scared Hulst was to commit to Horizon: Zero Dawn. Hulst replied, “very scared”. Guerrilla Games is known for its PlayStation exclusive series Killzone, a linear first-person shooter, dark and full of what Hulst describes as “gritty beauty”. It’s not surprising that Hulst was scared: Killzone is a far cry from their newest title Horizon: Zero Dawn, a bright and beautiful open world adventure that took over six years in development and encountered a number of creative hurdles.

Horizon: Zero Dawn revolves around the young archer and huntress Aloy, who is brought up by a man named Rost as an outcast of the Nora tribe. Aloy’s world is set in a version of our distant future. Backdrops feature overgrown and dilapidated skyscrapers, while bunkers full of technology the tribes refuse to make use of lie underfoot. The world’s inhabitants refer to these things as belonging to the “old ones”, and treat the buildings and technology with the reverence that one might treat an ancient Greek ruin now. Early on a young Aloy falls down into a bunker belonging to the “old ones”, and finds a ‘focus’. This is a small piece of technology, worn on the ear, which analyses her surroundings and provides a kind of augmented reality, which in turn gives her an advantage in her hunting, fighting and learning. Driven by her desire to be accepted the local Nora tribe and to find out why she was outcast, Aloy trains her entire life to take part in the ‘Proving’, a tradition of the Nora tribe, which will result in her acceptance if she should win.

Aloy is quite probably one of the most likable main characters in an AAA video game recently. She is written exceptionally well, with interesting dialogue and relatable reactions in all encounters. You can play her as intelligent, sensitive or aggressive. Most of the time you can choose a response matching these three alignments. When you want her to be angry, she really is, when you choose something more heart driven, it’s sincere, and when you want her to be clever, you’re given witty responses. She figures things out along with you, and isn’t intentionally dumbed down to drive the plot. If you solve a puzzle, she generally has too. It’s wonderful to play a character as well developed as she is in a video game.

In his conversation with Druckmann, Hulst touched on some of the earlier incarnations of Horizon’s combat, which at one point included the player blasting hostile machines with submachine guns. It became obvious that this wasn’t a good fit, and was thankfully scrapped in favour of bows and arrows. This presented a new challenge: “‘Is this ever actually going to work? What are we doing?’ You’re firing arrows at this big overpowering machine. How will that ever work?” Well, Guerrilla made it work, offering an arsenal of ammunition types based around the central idea of exploiting an enemy’s weakness. Going far beyond the classic ‘elemental weakness’ archetype, you can use your equipment to stun foes, turn them against each other, or even rip heavy artillery from your opponents to use against them. Beyond the bow and arrow you’ll acquire other rudimentary weapons, such as slingshots to fire explosive rounds, or a ropecaster used to tie enemies in place with ropes.

Early in the game you’ll be squaring off against small, nimble machines that chomp at you but can be pretty quickly dispatched with a couple of melee strikes. You realise pretty quickly however that you’re going to be up against an army of larger machines that are much, much more powerful than you are. You’re taught to carefully plan your actions before you dive into combat, using your environment to sneak around and set traps, maybe overriding a machine or two to fight for you, balancing the scales. Combat can be frustratingly tough when not prepared, but hugely satisfying when you strategise your way out of a conflict where you’re outnumbered and outgunned. It truly is refreshing to play a game that refuses to let you simply brute force your way out of any situation.

Horizon: Zero Dawn is an excellent example of how powerful an open-world experience can be when handled correctly: you’re imbued with a sense of agency and freedom in almost everything you do, but you’re not offered an endless number of dull sidequests and near-identical equipment loadouts. The sidequests can get repetitive, but not as overwhelmingly so as the likes of the BioWare or Bethesda titles, and interactions between NPCs and Aloy are satisfying beyond just a cash or XP reward. Hopefully it doesn’t take Guerrilla Games another six years to create their next title of this calibre, but Horizon: Zero Dawn really proves that it’s worth it to wait a bit longer for a polished experience than to have a game shipped to you on its pre-planned release date long before it’s ready.