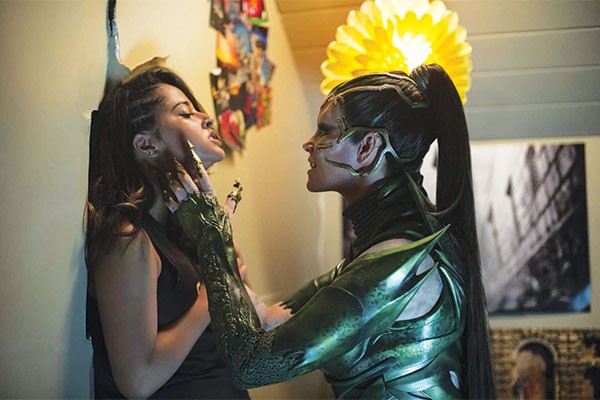 Anyway. This reboot gives us the origin story of the Power Rangers, so when we first meet them they are just five ordinary teenagers with attitude. One day they suddenly gain superpowers, and are enlisted by the magical floating head Zordon to defend the earth from the evil space-witch Rita Repulsa, with the help of their own personalised dinosaur-robots. If you’re familiar with the franchise, you’ll know all this already; if not, words don’t really do it justice.

So the premise is the same as the show, but the tone is way more dark and angst-ridden. Gritty reboots are all the rage in Hollywood these days, as is catering to the nostalgia of ‘90s kids - but the overlap between the two here is such a surreal contrast that it’s actually kind of hilarious. Now that the door has been opened, we’ll probably get gritty reboots of Step By Step and Sesame Street before too long.

For viewers new to the franchise, the film will likely stand up on its own merits, because it’s a solid film. And, to be fair, the original TV series hasn’t entirely aged well. If, like me, you rewatched the entire first season on Netflix, you may have been taken aback by the various weird things you didn’t remember (not least the rapping pumpkin). But still, it was perfect in its own way, and part of me was hoping that this movie would be just like the original show. However, the ‘90s was a unique era for kids’ TV, and the past just can’t be recaptured.

Still, if the franchise is going to adapt (or “morph” if you will) in the modern age, this movie was very entertaining and suggests good things for the future of the franchise.