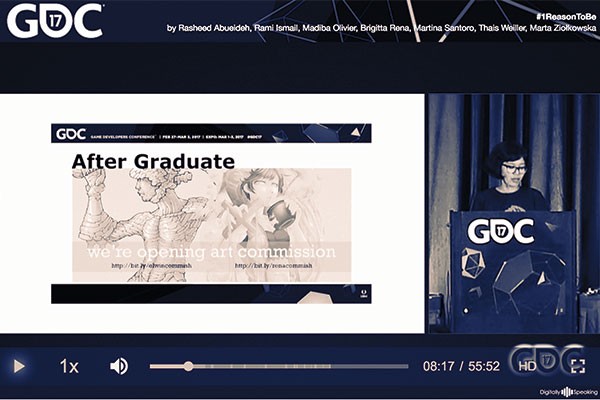 Last year I was fortunate enough to attend the Game Developers’ Conference (GDC) in San Francisco thanks to a very generous scholarship from the NZGDA and Callaghan Innovation (side note: these scholarships become available to apply for around December and you should absolutely apply for them if you’re interested in going). This was a really big deal mainly because A: I had never travelled anywhere outside of New Zealand other than the Gold Coast in Australia, B: I was going with fellow Runaway employees who I basically looked up to as Divine Entities, and C: I had only been working in the industry for four months and was about to go to the largest international games conference in the world, and all of my game developer senpais were going to be there.

No exaggeration, that week in 2016 was the best week of my life and really validated both my purpose in the industry and how fortunate I was to be a part of it.

This year, as a much wiser, older, and hotter game developer expert, I attended the conference as a speaker at the Community Management Summit. But who gives a fuck about what I spoke about! I want to share some of the talks I had the privilege to see, all of which you can watch too as they are free to watch on the GDC Vault and offer a fascinating insight into the professional games industry.

Starting as a hashtag on Twitter, #1ReasonToBe saw women in the game industry listing their reasons for working in the industry. The reasons were deeply personal and hugely relatable, and became a panel at GDC that now happens annually. It has seen a shift in content with the panel now being focused specifically on the perspectives of developers from around the world.

This year’s line up was particularly impressive, with speakers from as far afield as Cameroon, Palestine and Poland. This panel is hugely important as it offers insight into game development around the world; in particular the perspectives outside the heavily Western influenced industry, which is traditionally concentrated in the United States. At the end of Rasheed Abueideh’s talk, he received a standing ovation and I was sobbing out the door. If you are going to watch any, this is the one to see.

This recommendation is very biased because I love Final Fantasy and also got to talk to the speaker, Sun, at the Speaker’s Party, who is the kindest and most humble person I have had the pleasure of meeting so far in the industry. Myself, and fellow Runaway speaker Tim, spent half an hour praising him; fan girling and saying how great he is. BUT ANYWAY…

His talk was polished, funny and well put together, offering a great insight into the process behind and mechanic design of the Snapshot feature in Final Fantasy XV. It’s also pretty amazing to have employees from Square Enix (the developers of some of the most well-renowned role-playing video games, including FFXV) come and share their developmental process, so you should definitely check them out too!

The title says it all really. This series of microtalks has 10 speakers and features some hard truths about problems in the industry, including online harassment and race and gender disparity. These talks offer insights into ways in which the industry can be changed. Unapologetic and brave, these talks give me hope for the future of the industry; that we can work towards a more inclusive and supportive community.

The Last Game I Make Before I Die: The “Crashlands” Postmortem

This talk clashed with my timetable so I couldn’t watch it in person but I watched it on the Vault at work, which was a mistake because I was welling up in the first two minutes. Presented by Samuel Coster, the talk shares his personal battle with cancer during the development of Crashlands, a game he and his brothers worked on during his treatment. Make sure you watch this alone in your bedroom with a comforting hot drink and your favourite plushie to snuggle, because you will cry.

Breaking Conventions with The Legend of Zelda: Breath of the Wild
Everything I Said Was Wrong: Why Indie Is Different Now
Indigenous Games Lightning Talks
Indie Soapbox
‘Pokemon GO’ & Designing Interactive Games for the Real World

You should watch all of the available free to watch content on the Vault if you can because they are all amazing!