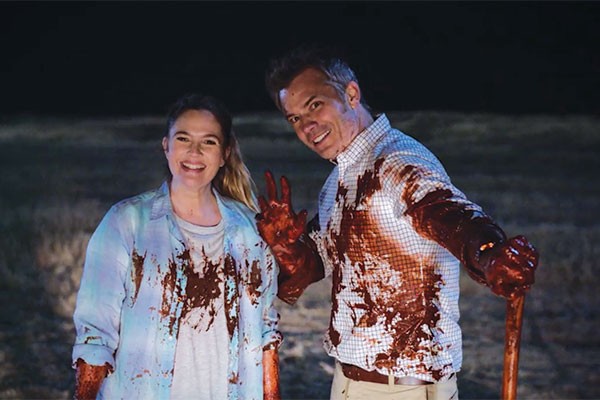 Comedy from Netflix, created by Victor Fresno, who is responsible for the critically acclaimed Better Off Ted. It stars (the criminally underrated) Timothy Olyphant and Drew Barrymore as two Californian real estate agents with a teenage daughter; everything seems normal until Sheila (Drew Barrymore) becomes undead.

This show is, um, probably not for everyone? In fact I nearly stopped watching halfway through episode one because of a scene that involved more vomit than should ever be allowed on a television screen, but I soldiered on because apparently even a metric ton of vomit won’t stop me from consuming my television needs!

Timothy Olyphant and Drew Barrymore are at their best in this series. Timothy Olyphant is just hilarious, there’s a scene where he is dancing by some toaster ovens that had me crying with laughter, and Drew Barrymore is given free reign to be her kooky Drew Barrymore self; as she should be. Like many sitcoms the side characters make or break the show, and there are some great ones in this series, the standouts being an endearingly awkward teen neighbour and a pair of feuding cops. I’m not going to overstate it, this show is pretty silly, and gross, and involves a lot of bodily fluids, and the occasional farting corpse, but it made me laugh quite a lot. And I really needed something to fill the sitcom shaped void in my heart left by Brooklyn Nine-Nine.

I think if you go into this with mediocre expectations you’ll probably think it’s great; if someone hyped it up to you, then you’ll probably be disappointed. It’s really just a weird, funny and at times gross little series that is poking fun at family sitcom tropes, and giving two talented actors a vehicle to show off their comedy skills. Seriously, Timothy Olyphant you guys, seriously. Someone should give him a firm handshake, a golden globe and maybe some free dental work from all the teeth gritting he does.