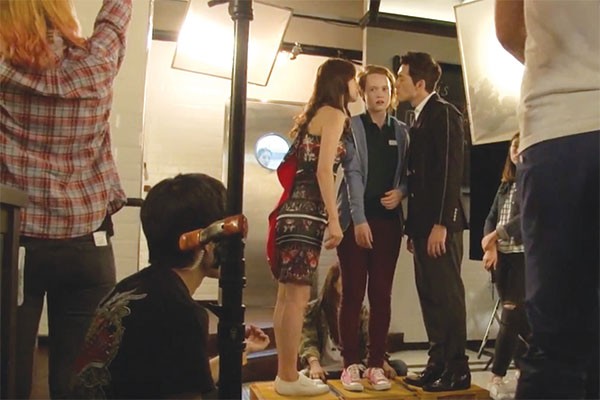 Claire Duncan (Liv Hewson) is a fangirl. The 20-year-old college student is obsessed with K-drama (Korean drama TV shows). She knows all the ins and outs of the genre, and hangs excitedly on every line, cliffhanger and dramatic turn the shows throw her way. Stuck between work and study, Claire uses her obsession with K-drama as an escape while fantasising about her favourite leading man, Joon Park (Sean Dulake), taking her away from her boring life. After an accident at work while watching the latest episode, Claire is sucked into her smartphone and finds herself in the titular Dramaworld - where K-drama characters live.

Claire drops into her favourite show and interrupts the storyline. She meets Seth (Justin Chon), another K-drama fanatic, who informs her that they are facilitators - background characters who play an integral role in bringing the two romantic leads together. Claire must now repair the storyline and help Joon Park and his leading lady, Seo-Yeon (Bae Noo-ri), fall in love.

Dramaworld is like a breath of fresh air among show after gritty show trying so hard to affect audiences. While the subject matter is silly, Dramaworld works very well because it never forgets what it is: a show about a fangirl traveling to her dream fan world, getting to hang out with her fan favourites. It’s light hearted, fun and incredibly entertaining. Liv Hewson embodies the obsessed fangirl well, and brings it home with the kind of obnoxious sincerity only fans are capable of exuding.

Being into K-drama isn’t necessary to enjoy Dramaworld. Claire effectively acts as an educator and trojan horse into the world, explaining tropes, characters, plot devices and so on. However, if you are into K-drama there are some added delights for you. There are a dozen cameos from famous K-dramas, and the show explores the genre thoroughly throughout the season.

Dramaworld is available on Netflix and consists of 10 episodes which range in length from five to 20 minutes - so it’s very easy to get through in one sitting.

I love Dramaworld and so should you.