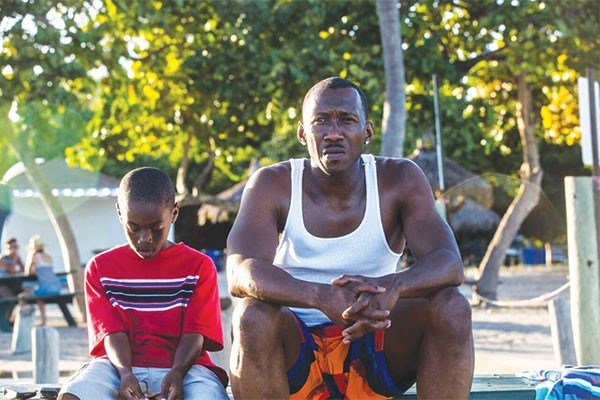 This film was originally based on a play called In Moonlight Black Boys Look Blue, written by Tarell Alvin McCraney to cope with his mother’s death by AIDS. Indie filmmaker Barry Jenkins stumbled upon this hidden piece of greatness and adapted the long-shelved play into one of the most powerful films to grace screens in 2016.

Moonlight separates its story into three arcs, each titled by the different names the protagonist is given or assumes throughout his life. The film begins with ‘Little’, set in the War on Drugs era. We meet preadolescent Chiron, a lonely boy who is discovered in an abandoned apartment by Juan (Mahershala Ali) fleeing from bullies, after this Juan and his girlfriend become parental figures to Chiron as his mother (Naomie Harris) is hardly around, either working at the hospital or hiding her substance abuse from her young son. Juan teaches Chiron to sink or swim, literally, in a tense but beautiful scene where he lets young Chiron go in the ocean and he instantly learns to fend for himself in the violent waves. Chiron grows older, but Juan’s teachings don’t escape him even in the ‘Chiron’ and ‘Black’ chapters that follow. He develops a thick skin and learns to survive on his own as his mother’s drug use consumes her.

“Who is you?” asks his mother after Juan drops him home to her. Moonlight is a poetic story about identity. The film’s neo-realistic colour scheme and James Laxton’s intimate cinematography provides both beauty and real darkness. For Chiron there isn’t often a shred of light at the end of the tunnel, just the deceptive moonlight, which in the end also betrays him.

Filled with impeccable performances from House of Cards star Mahershala Ali, Naomie Harris as the harrowing mother-from-hell, and singer-songwriter Janelle Monáe, Moonlight is destined for coming-of-age glory and will be a relevant hallmark of queer cinema for many years to come.