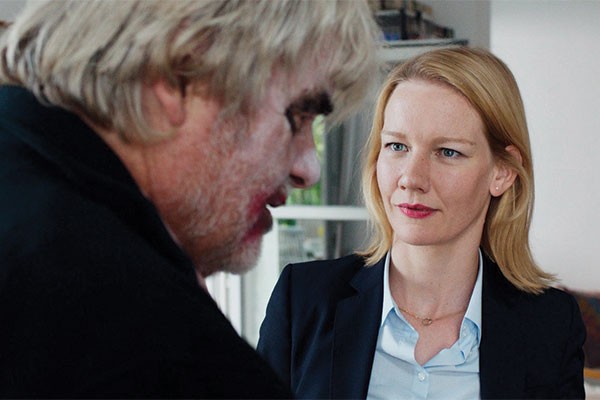 “It isn’t a comedy - I’m not sure why people think it is” speaks the confused Maren Ade of her acclaimed film. It is at times uproariously funny, but also achingly sad. Toni Erdmann is an unexpected deadpan delight that’s worthy of your time.

After the death of his beloved dog, Winfried (Peter Simonischek), a divorced music teacher with a love for playing practical jokes, flees for Romania to reconnect with Ines (Sandra Hüller), his distant career-driven daughter. When he realises his attempt is futile, as Ines is far too consumed by excelling as the managing consultant for an oil company, he pretends to leave Bucharest, but later returns wearing a long brown wig and filthy fake teeth and adopts the persona of the titular Toni Erdmann.

From this point on, the narrative becomes a surreal nightmare for Ines as her father, as Toni, begins appearing at important work functions, meetings and other social situations involving her colleagues. He seeks to distract her with his absurd alter ego, as he believes that focusing on being successful in a corporate world is the reason she’s deeply unhappy. To her face, he even questions her humanity after observing her blatantly lie that she had a “nice time” shopping with an important client’s wife. Maren Ade invites us to consider the effects globalisation has on our relationships, through the eyes of the estranged father and daughter, creating a unique story that’s equally personal and political.

Toni Erdmann is easily the most bizarre and bittersweet film about father-daughter bonding I’ve ever seen and there’s very little I’d change about it. With its complimenting performances, socioeconomic commentary, not-to-mention an amazing cover of Whitney Houston’s ‘Greatest Of Them All’ sung by Hüller, the film gives much to digest in its near three hour runtime. Above all, it is an ode to embarrassing dads everywhere. It reminds us that, as much as we try to disassociate ourselves from the fact, we’ll always be a product of them.