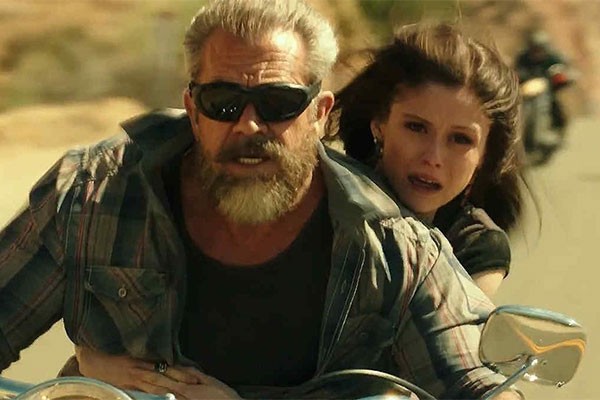 It’s harder to enjoy Mel Gibson’s movies now that his various forms of insanity are out in the open. Every time he loses his shit on screen, you can’t help but wonder how much of it is really “acting”—and it’d be nice to travel back in time several decades and be able to enjoy Ransom and the Mad Max movies while still being blissfully unaware. However, if we can put that context to one side and view this movie on its own, it’s a solid and entertaining action flick.

Gibson’s character is an ex-con and war veteran named John Link, who must re-embrace his combat skills and criminal contacts in order to protect his estranged daughter, Lydia (Erin Moriarty). In fact the plot is pretty similar to Taken, but substituting sex traffickers with drug dealers, and Paris with New Mexico. Lydia was dating one of said drug dealers when they took her along on a raid. The raid scene is more suspenseful when you don’t know how it plays out, so I won’t spoil it – suffice it to say that Lydia leaves with both the dealers and the police after her, reunites with John, and they both go on the run together. That they don’t try to get the police on side when there are violent criminals after them requires some suspension of disbelief, but I guess it’s necessary for the story.

The plot has the potential to be quite intense, but all in all, the movie is actually pretty fun and enjoyable, and not too much of a downer. The dynamic of John and Lydia rebuilding their relationship has some comedy and light-heartedness to it, and the two actors have a nice on-screen rapport. The excellent William H. Macy has a supporting role as John’s friend Kirby, but sadly he’s just as under-used here as he was in Room.

The movie is well shot and looks good. Some of the action scenes are better than others, but they’re all fairly effective, and there’s one in particular that’s quite awesome. Overall the movie probably won’t change your life, but it’s an entertaining watch and 90 minutes well spent.