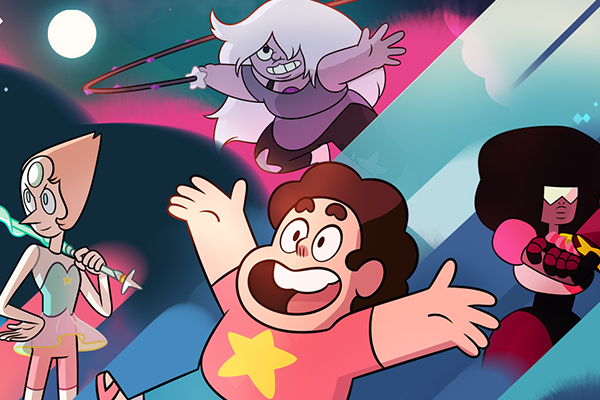 Steven Universe is quite possibly the most progressive children’s TV show ever. Steven Universe (Zach Callison), who the show is named after, is a young (mostly) human boy with magical powers due to being the son of the Crystal Gem, Rose Quartz (Susan Egan). Gems are essentially a race of alien women who are formed from precious gems. The Crystal Gems have remained on earth to protect it from monsters and other alien related threats. Steven lives with the Crystal Gems Garnet (Estelle), Pearl (Deedee Magno) and Amethyst (Michaela Dietz) in a house attached to their temple. The show begins with Steven at quite a young age, with no ability to use his powers, and only just beginning to join them on their missions.

There are many aspects that make the show amazing. The animation is adorable, the voice acting is perfect and it’s filled with sweet songs. It also depicts a multitude of different body types, relationships, sexualities and genders, on top of depicting perhaps the healthiest lesbian relationships on TV. Furthermore, while Steven is a boy, who is adventurous, courageous and confident; he’s also sweet, nurturing and caring. He wants to help and save people, he’s sensitive to the feelings of others, and frequently works hard to help other people resolve conflicts and find alternative methods to violence. He’s incredibly patient and kind with everyone he encounters. This isn’t to say he is flawless, but he’s definitely up there on the good person scale.

All the other characters become very relatable through Steven’s innately empathetic nature. Because of this, the show is able to tackle some meaningful and serious topics, and reveals an emotional depth that few children’s animated shows are capable of.

There is literally nothing I don’t like about Steven Universe. It’s perfect, and all other TV is ruined for me forever. Episodes are only 11 minutes long, and there’s three whole seasons to consume—so get amongst.