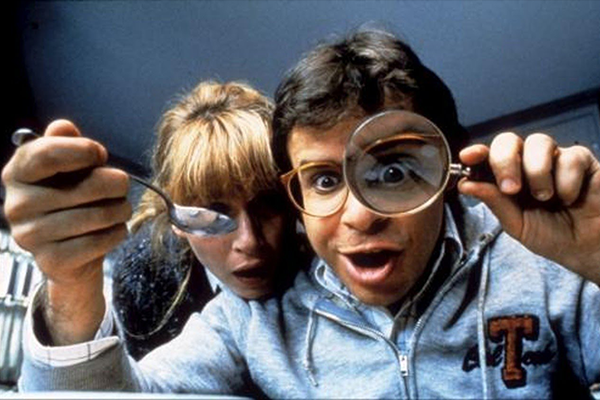 Honey, I Shrunk the Kids

Honey I Shrunk the Kids is a guaranteed nostalgia-tastic viewing experience for any kids of the '80s or '90s. Whether you grew up with the movie or not (though I did), the pre-CGI effects, elaborate sets, gentle pace, and general look and feel of the film place you right in 1989. There’s talk of a remake every so often, but this film really couldn’t be recreated today. Rick Moranis stars as Wayne Szalinski, a suburban inventor who accidentally reduces his children to an abnormally small size, and must then recount the event to his wife in the first person. He has become convinced that his prototype shrinking machine will never work, but one day his children Nick and Amy, as well as the neighbours’ children Ron and Russ Thompson, find out the hard way that it does in fact work. Now a quarter of an inch tall, the kids are accidentally thrown out with the trash, and must trek through the Szalinskis’ garden in order to return home. The garden’s insects, sprinklers and lawnmowers are suddenly a lot more menacing.

The film takes care to place itself in the real world, spending a full 23 minutes with the two families as they do everyday things, before anything crazy happens. The kids are often kind of unpleasant—they spend much of the film’s runtime bickering with each other, but they at least seem like real kids, rather than the squeaky-clean caricatures of say, High School Musical. Apparently the lead role of Wayne Szalinski was turned down by both Chevy Chase and John Candy before Rick Moranis was offered it, but it’s hard to imagine anyone but Moranis in the role: he doesn’t go for an overtly wacky or eccentric portrayal of the inventor, but just plays it like a normal dad. And because everything is relatable, the action packs more of a punch when it arrives—sometimes getting quite intense for a kids’ movie.

Overall, the film is yet another example of why this was a golden era for family movies (in my completely unbiased opinion as someone who grew up around that time). While not quite up there with Jurassic Park or Jumanji, it’s worth revisiting.