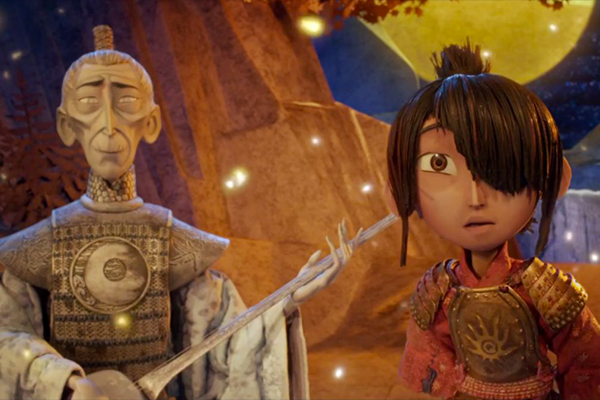 From Laika, the studio behind the likes of Paranorman, Coraline and The Boxtrolls, comes Kubo, a magical coming of age tale. The line “If you must blink, do it now” opens the film, setting the scene for a fantastic adventure film about love, family and storytelling.

Kubo (Art Parkinson), a one-eyed young boy in ancient Japan, lives in a cliffside cave with his mother. He cares for her as she drifts in and out of a catatonic state. During the day, he makes a living by impressing the local townsfolk with his magical ability and storytelling skills. He does this by playing his shamisen - a magical musical instrument - that allows him to animate and control the figures he creates. Despite normally being careful at his mother’s warnings, one evening Kubo stays out into the night and is found by his evil aunts (Rooney Mara) and Grandfather, the Moon King (Ralph Fiennes). With the help of Monkey (Charlize Theron) and Beetle (Matthew McConaughey), Kubo sets out on an epic quest to save his family, solve the mystery of his fallen father and defeat the forces against him. The claymation alone is enough to praise this film. Laika has proven time and time again how capable it is when it comes to animating children’s films with their clay creations moving impressively and naturally across the screen. The voice acting by an all star cast is great throughout. Art Parkinson proves himself as a competent voice actor, and George Takei lends his voice to one of the townsfolk for a sneaky cameo.

Kubo tells such a sweet story. It’s predictable at times, but not in a bad way, and still manages to take a different spin on things anyway. Even when you might guess what will happen next, it will unfold in a surprising way, or result in something entirely unexpected. The film makes some bold decisions, especially for what is essentially a children’s film, but sticks with it. A weaker film would have given in and taken the easier and essentially ‘happier’ route. But happiness in this case is subjective, and the clever, kind and trusting Kubo makes for an excellent hero.