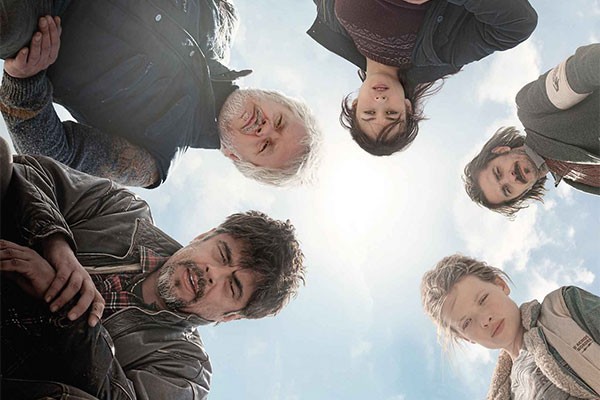 In A Perfect Day, Benicio Del Toro, Tim Robbins, Olga Kurylenko and Mélanie Thierry play four aid workers stationed in the Balkan Mountains, during a period of armed conflict. They are trying to retrieve a rotting corpse from a well, to prevent contamination of the local water supply. Something as simple as finding some rope proves to be almost impossible, as they encounter many obstacles that demonstrate just how fractured the societal infrastructure has become in the area.

So we have a great cast, scenic filming locations (which are actually in Spain), and an interesting story. But as the middling critical response indicates, there’s something about the movie that doesn’t fully hold together.

The tone is sort of all over the place. The movie addresses the seriousness and sadness of the situation it depicts, but this is at odds with scenes that try to up the “coolness” factor: having the characters whap on sunglasses and drive through the mountains to the strains of various 60s rock songs, as if we’re watching ‘CSI: Balkans’ or something. Additionally, the tone is also comedic in places. I’m sure it isn’t impossible for a movie to bring these diverse aspects together (Three Kings managed it), but here the mood feels a bit jumbled.

Initially, the script has a Power Rangers-like tendency to ascribe one sole defining characteristic to each of the characters: Del Toro is the level-headed one, Kurylenko is the by-the-book one, Robbins is the rebellious rock’n’roll guy, and Thierry is Anxious Spice. Fortunately, they all become more three-dimensional as the movie goes on. Del Toro in particular plays a cool protagonist, and since he often plays villains it’s a nice change of pace to see him in the hero role.

The end of the movie is quite sudden and unexpected, but works really well. Perfect Day isn’t my favourite of the film festival movies I’ve seen (so far that would have to be Poi E: The Story Of Our Song), but overall I’m glad I saw it.