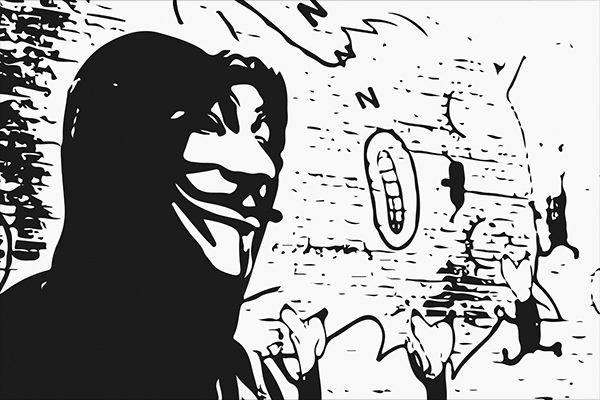 Anonymous is a collective of computer enthusiasts who have a far-reaching presence in both the real world and the online one. Seen on Youtube clips wearing the mask from V for Vendetta, as well as having electronically distorted voices, they are often called a “hacktivist” group (from hacker activist) and are seen as either cyber terrorists or cyber freedom fighters depending on your perspective.

The well produced 2012 documentary We are Legion traces the development of Anonymous from its origins in 4chan, specifically the message board /b/. The goals of Anonymous are a free and open world wide web, and the disillusion of any central oppressive power who aim to control the flow of information. With a liberal sense of right and wrong, Anons (members of Anonymous or their offshoots) stage revolutionary action inside the internet (not just the World Wide Web). They have launched cyber attacks on the Church of Scientology, ISIS, Mastercard, Visa, and police departments across the world. Anonymous are vocal supporters of groups like the Occupy movement, and helped to restore internet services during the Arab Spring when local governments shut down the internet for its citizens.

These attacks operate in the same way as any other form of warfare. In some cases it is surgical attacks using zero day exploits where Anons search through networks, download a wide range of information and then reupload it for public consumption. In 2011, Anons posted the personal details of the police officer involved in the pepper spraying of the unarmed protesters at UC Davis. In 2012, Anonymous and Knight Sec (an offshoot of Anonymous) published the names, social media posts, and photographs of members of the Steunbenville High School football team who were involved in the rape of an underage girl. These attacks were to bring attention towards the lack of accountability those with money and influence are privy to, compared to the general public.

One notable incident was the result of a man who should have known better. Anonymous are not known for masking their directive. Their tagline is “We are Legion. We do not forgive. We do not forget. Expect us”. When then CEO of HBGary Federal Aaron Barr claimed that he had devised techniques to identify Anons (presumably he built an algorithm that uses Zipf’s law), and was willing to sell the data to law enforcement and others, this did not sit well. A group known as LulzSec, a black hat computer hacking group that claimed responsibility for the release of user accounts from Sony Pictures in 2011, compromised HB Gary and HB Gary Federal’s servers. The very captivating transcript on Pastebin shows HB Gary company president Penny Leavy trying unsuccessfully to negotiate with LulzSec members and distance herself from Barr and his actions.

Anonymous makes up the third variable on a ternary graph, the other two thirds being governments and corporations. We, the general public sit inside the graph at varying degrees, our position on them is dictated by our own perceptions. I think we need groups like Anonymous for the very simple reason of checks and balances. Anonymous is engaged in what I call WW0 (World War Zero) with governments and corporations, holding them accountable by threatening to expose their secrets, doing damage to share prices, and assisting the public in seeking change. This war is zero sum, often using zero day exploits, on a system made of ones and zeros.