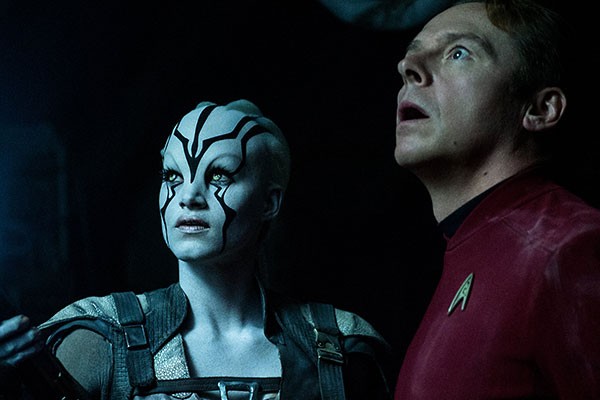 In this third instalment of the rebooted Star Trek film series, director Justin Lin of the Fast & Furious franchise takes over the helm from J. J. Abrams. This mercifully means fewer lens flares, but sadly also steers the movie towards being a mindless action flick.

In Star Trek: Beyond, the USS Enterprise is ambushed by an army of malevolent aliens, led by commander Krall, who is hunting down an artifact that Captain Kirk has in his possession. The ship is badly damaged and must crash-land on Krall’s planet, where most of the film takes place. This crash scene has an amped-up air of tragedy and grandiosity to it, despite occurring about ten minutes into the movie, at which point we’ve had little story and only a few minuscule crumbs of character development. Already it feels like pacing wasn’t much of a concern.

While the supporting cast are great, Kirk and Spock are both fairly bland characters. Chris Pine and Zachary Quinto don’t quite bring the same gravity and personality to the roles that Shatner and Nimoy did. However, in the previous two instalments it was clear that the writers were at least trying to make them interesting characters. Not so much here.

At a technical level, the film is excellent: the visuals and special effects are top-notch. In particular, there’s a helix-shaped space city with shifting gravity, which is very cool; huge swarms of metallic drones that fly together in bird-like formations, and the planet landscapes are cool too. However, if one isn’t invested in the story then imaginative visuals can only go so far.

I have to give special mention to one scene that was phenomenally awesome. In this scene, the crew is cranking Sabotage by the Beastie Boys while flying through a gigantic cloud of the swarm-drones, many of which are exploding. If the whole movie had sustained that level of awesomeness, it’d be a masterpiece.