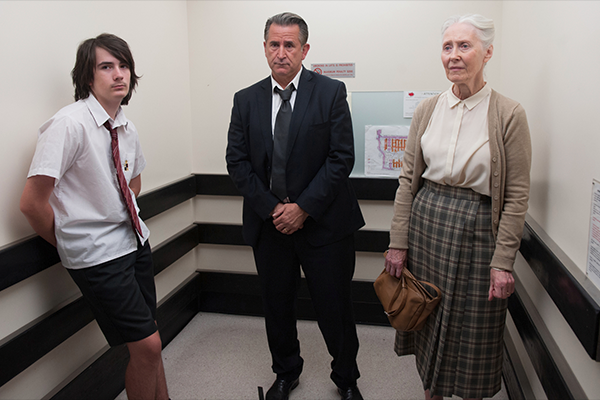 A Month Of Sundays

Australia seems to be quite good at producing heartwarming comedies, and when I went along to this one I was expecting something in the same vein as The Castle or The Dish. In the end, it felt more like a Wes Anderson production, in that it is artfully shot and could be described as quirky and offbeat. It also left me feeling the same way that Wes Anderson movies usually do: entertained, but like I was missing something.

Anthony LaPaglia stars as Frank Mollard, a cynical real estate agent in Adelaide. He is estranged from his ex-wife and teenage son, and beneath the surface he is clearly not at ease with himself. One day he gets a phone call from a woman he assumes is his deceased mother. It turns out to be another woman who dialled the wrong number, but he strikes up a friendship with her, and she allows him to deal with his unprocessed grief. Fred Dagg himself, John Clarke, has a supporting role as Frank’s colleague Philip.

To the movie’s credit, I really couldn’t guess which direction it was going in. From that plot synopsis you’d assume it follows a predictable “grumpy man learns to focus on family over career, has heart of gold deep down blah blah” trajectory, but it wasn’t that clear or obvious. But for the same reasons, it sometimes felt a bit aimless and indecipherable.

For instance, much of the comedy was lost on me (aside from a few laughs courtesy of John Clarke). Eventually we understand why real estate is central to the movie: it is a story about the cyclical nature of things, which also ties into the parent-child relationship themes. And there are moments with a clear visual metaphor of leaving the nest and facing the outside world.

Overall I’m still not exactly sure what I thought of this movie. But it is competently made, well-acted (LaPaglia is very good), and it’s clear that plenty of thought and effort went into it. Perhaps it just requires a second or third viewing.