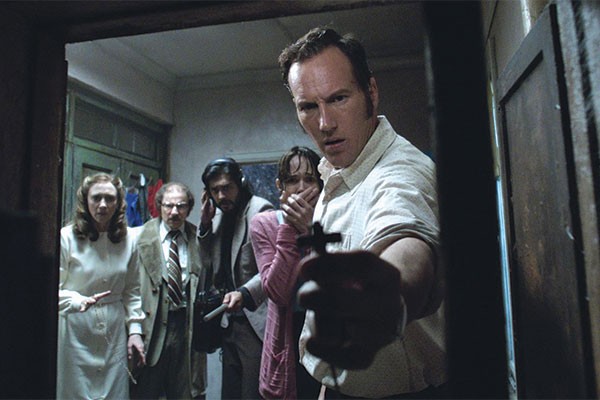 The Conjuring 2 is by the same director who made the Insidious movies, so as you’d expect, it scores very high on the shit-my-pants-o-meter. The trailer alone made me lose some sleep, and apparently someone actually died of a heart attack while watching the movie. If you like scary movies I recommend seeing it, but expect to be jumping at loud noises for a while afterwards.

Patrick Wilson and Vera Farmiga reprise their roles as real-life ghostbusting couple Ed and Lorraine Warren (I’m not sure how much of the movie was based on their real documented experiences, but I’d think/hope not much). In this follow-up to the first Conjuring, they attempt to help another family, the Hodgsons of London, whose daughter is being terrorised by a deceased former resident of their house. Meanwhile, Lorraine keeps seeing visions of Ed’s death, and is being stalked by a terrifying grey nun-demon thing. (My friend and I were at least able to create some levity by making nun-related puns throughout the movie).

I can’t say much without spoilers, but the movie hits the ground running with its visuals, so that there’s less room for suggestion and gradual revelations later on. They could have done better with the pacing and buildup. That said, there are still some very effective scenes in the movie’s second half - in particular, one long continuous shot where all of the creepy stuff is happening out of focus in the background.

The 1970s-Britain setting gives the film a unique feel, and extra weight somehow - maybe because of the UK’s long history full of supernatural folklore. And for some reason, having ghosts that speak in low-voiced South London accents really is spooky as hell.

In terms of pure scariness, movies probably don’t get much more potent than The Conjuring 2. It doesn’t quite have the narrative tightness or the underlying themes/ subtext to be on par with say, The Shining or The Others - but if you’re in the mood for a stomach-rattling thrill-ride of terror, it delivers.