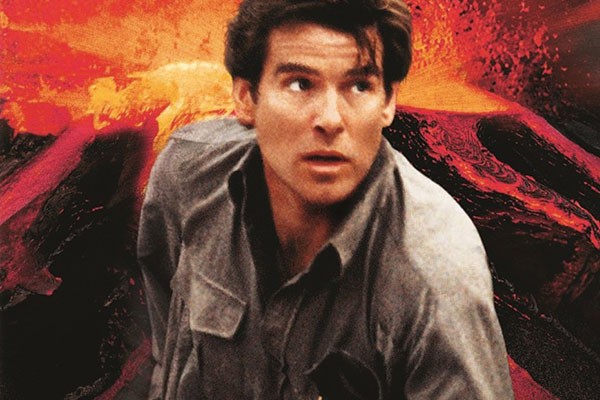 Was this anyone else’s favourite movie as a kid? For me it even overtook Jurassic Park at one point. (Though it just occurred to me that many of this year’s freshers weren’t born yet when it was released... holy christ). In my flat we bought a projector in lieu of a TV, so that we could watch movies on an entire wall: naturally, ’90s disaster movies were our first port of call. Dante’s Peak is one that holds up well, especially when you’re watching it on a wall-sized screen. My god, the awesomeness.

The movie is set in the town of Dante’s Peak, Washington, which is located right next to a dormant volcano. Volcanologist Harry Dalton (played by Pierce Brosnan) is called in to investigate some unusual seismic activity in the area, which everyone expects to be benign. But of course, it isn’t as benign as they think, and the volcano becomes slightly less dormant during the movie. Linda Hamilton also stars as Rachel Wando, the town’s mayor.

Because this was the first disaster movie I ever saw, I didn’t realise at the time how riddled with clichés it was: there’s the hero scientist who tries to warn everybody of the danger, and the evil forces of economics & politics that attempt to silence him; the hero also has some demons from the past, so everybody assumes his judgement to be clouded; and there’s both a male and a female lead, one of whom is a single parent. (Hmm, wonder if they’re going to hook up and form a happy new family unit?)

However, the movie really delivers with its special effects, suspense and action, and also with its scientific accuracy, apparently. It also has some great music, and Brosnan and Hamilton really do a good job with their roles, creating characters that seem like real people.

If I was grading purely on nostalgia & epicness value, Dante’s Peak would be a solid A+. But if I’m wearing my objective movie-reviewer hat, I’ll have to be honest and give it a B+. However, it’s certainly worth watching, and from a directorial point of view it’s a real success for kiwi Roger Donaldson.