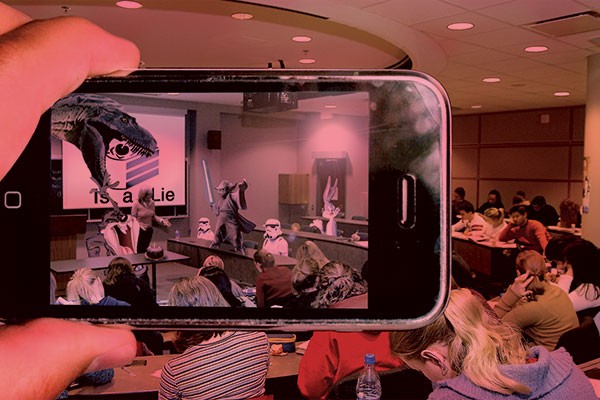 Why do we need..augmented reality?

Augmented reality (AR) is where applications on mobile and tablet devices are able to use both the camera lens and a database to add additional information onto a real world scene in real time (or near to). This is different from Virtual Reality. In VR, the scene is created from nothing and fed to the user through a headset. The most commonly known example of AR is Google Glass, eyewear that is able to project information about what the wearer is seeing. This is by far the coolest and scariest thing I have come across.

Two of the main uses in the real world for AR is marketing and the military. A Youtube interview with Jay Wright, VP of Product Management at Qualcomm, demonstrated some fascinating uses for AR in the civilian world. One was the Maxim Motion app. When the tablet camera is pointed at the cover of a Maxim magazine, it scans the cover against a list of known images in the database and then loads the video linked to that particular cover. In the demonstration of the app, the texts disappeared from the cover and the model came to life and changed poses.

Wright also demonstrated that when toy company apps are aimed at children’s toys and books, additional content is unleashed and play transitions from the real world into the digital format. While I acknowledge that this has the potential to add to the child’s play and learning experience, I think this could eliminate key aspects of imaginary play by giving the toys individual voices and values from our imagination. These apps make the child’s interpretation of what the character says and does redundant.

One that is potentially beneficial to adults is AR fashion apps like TryLive. Using the camera, the app takes an image of the user who can then “try on” clothes. Essentially the garments are overlaid onto the user’s body and they can “model” them. Though I am not an expert on fashion (my clothes have one function—to moderate body temperature), I can see how this could speed up the shopping process of physically trying on clothes. It also eliminates the need for large storage spaces, as the chosen clothes could be ordered online and sent directly from the manufacturer.

Thanks to funding from US Agency, DARPA, a pair of binoculars were developed by a US company SRI Technology which are able to geotag locations. One practical benefit of this technology also is that text is able to be added to the Geo Marker, allowing anyone with the technology to access the information. This is great for up-to-date rapid highlighting of areas such as makeshift field hospitals or areas that are inaccessible. Those familiar with video games like Ghost Recon have used the same technology when indicating to your squad which team member is targeting which foe. In time there are plans for the SRI binoculars to incorporate digital geo tags on mobile targets as well.

The goal of AR is that when you walk down the street, you will be updated with new information when you use your phone (or through your contact lens). The information could range from the local history, to nearest coffee shops, to those on dating applications. Ideally, you would pick and choose what information streams you subscribed to as the total information is vast. The potential to geo stalk someone, as well as having facial recognition software compare my likeness to a database like Facebook are two of my greatest concerns. The need to unite the world digitally is okay but only if there are non-evasive options available.

AR has great potential for marketing gimmicks like digital reproductions of sports matches on screen when pointed at a newspaper picture of said match. Or using smartphones to explore two different museums or art galleries (one real world, one an AR version) at the same time adds to the experience. It is when the unilateral acceptance goes unchallenged that concerns of ethics and privacy are ignored for the newest, coolest misdirect.

TL; DR - AR is cool and scary. It can add huge value to the real world, while simultaneously create an environment with too much information.