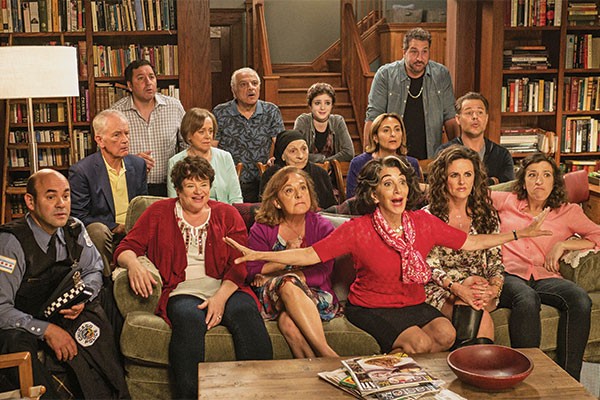 I made the mistake of rewatching the first My Big Fat Greek Wedding (2002) the night before I saw this, and it honestly set my hopes far too high. In one of the least coherent films I’ve seen in a while, Toula (Nia Vardalos) and her husband Ian (John Corbett) are getting ready to send their daughter Paris (Elena Kampouris) off to college. They are also struggling with their relationship. Meanwhile Toula’s parents Gus (Michael Constantine) and Maria (Lainie Kazan) discover they aren’t actually married and decide to re-do their wedding. If that’s not enough for you to follow, there’s also Gus’ search for his ancestors, Paris’ search for a prom date, Toula trying to figure out who she is without her daughter, and various character revelations from the rest of the family. Mid-Movie, I felt like yelling at them to stick to one idea and do it well, instead of this hodge-podge of half-baked storylines.

On top of that, the comedy itself isn’t all there. Where the first film had a quirky vibe, this relies so heavily on stereotypes that it’s missed out on originality by miles. Here, the scene in which Toula’s father Gus is learning to use a computer for the first time, just feels recycled. At times, I wondered whether writer Nia Vardalos had been living underground for the past 14 years, because anyone who’s seen modern comedies would know that older people trying to understand modern technology is not groundbreaking humour. And if you’re going to stick to old tropes, at least do them better.

Maybe I’m just being mean because the first movie is so much better. I still laughed at times because I do enjoy watching the Portokalos family on screen, and this is not a terrible comedy (it’s just not great). It does have heart - the tone of the film is generally uplifting, and there are some sweet moments between people who really care about each other.

That being said, if you want to see a fun rom-com about a hilarious Greek family, go watch the first one.