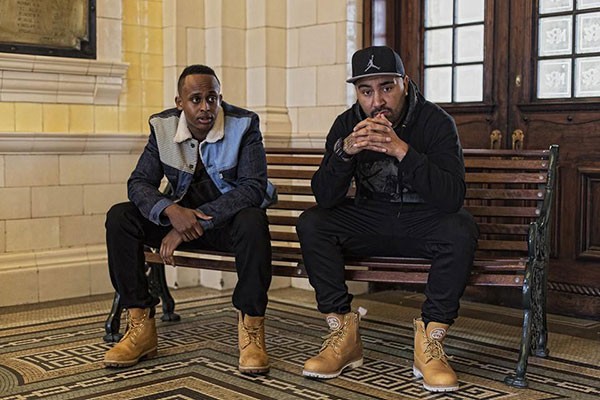 Dunedin has birthed some huge names in music, with acts like Six60 and The Chills enjoying not only national but international success. While certain acts have made it big outside our wee student city, hip-hop has not been among them.

Lucas “Big Sima” Gunn asked us to “name a rapper other than Scribe to come out of the south. I bet you can’t.” True enough, we struggled to come up with one. Gunn and his Legacy Music Group are looking to change that with their new record label. The Legacy family consists of co-directors Lucas and Hamish Gunn, Ashleigh Russell, Mo Muse as the flagship artist, Joe “Lil J” Tumohe as the label DJ, Levine “Vine” Lale as the in-house producer, and creative partners Angus “AC” Cleland and Johnny “BXNGX” Ward.

Legacy’s story is a peculiar one. Lucas moved to Dunedin from Christchurch following the earthquakes, bringing with him a burning desire to make music. “I came to Dunedin with nothing really,” Lucas tells us. “I just wanted a fresh start. I had some clothes and some money and that was it.”
He recorded Rebuilt, his first album as Big Sima, on loaned equipment in just one week. He then recorded his album The Upper in the basement of a strip club where he was working as a doorman. When Mo Muse featured on a track for that album entitled “$LANGA”, Sima saw massive potential in the young artist.

Sima wrote up a business plan and found himself some investors. After gaining the funding, Legacy set up their studio, right across from the location where Sima recorded his first demos in Dunedin. “It was natural for me to finish up so close to where I started,” Sima said. From conception to fruition, Legacy was created in just seven months and has been making steady progress ever since.

Their goal is to cultivate a booming hip-hop scene down here in Dunedin.

While Dunedin has hip-hop listeners in abundance, there is a distinct lack of artists. The main problem with rap music in the south is apparently a lack of consistency. “Hip-hop has always been around in the south but the drivers come and go. The North Island has the stable acts such as David Dallas and YGB helping to grow new artists. Legacy wants to bring the stability the South Island needs.”
Though they have ambitions to conquer the world, Legacy is proudly Dunedin-based. “Do it from where you are,” Sima tells us. “You can’t conquer the world until you’ve conquered your home town.”

At present, Legacy’s priority is developing their main artist, Mo Muse. While relatively new to the scene, Mo has been making waves and opening for some huge acts. Following his trial by fire, Mo has played alongside some of Aotearoa’s best rap artists - Raiza Biza, State of Mind and Third3ye. Mo’s latest track “Marathons” was released last month, and shows just how far Mo has come already.
The AC-produced track is the most polished release from the Legacy camp thus far, and is an undeniable standout among hip-hop releases this year. “Marathons” opens with a soft vocal melody, before Mo spits some impressive verses over a heavy drum beat. Mo’s word play and lyrical content must be heard to be believed.
Hot on the heels of “Marathons”, Mo plans to carry on releasing singles leading up to his debut album, Not Safe for Work. He is in safe hands at Legacy, with Big Sima’s ten years of experience in the game making him the perfect mentor.

After spending some time with the Legacy Music Group, I have no doubt they will achieve what they’ve set out to do. They have the drive, talent and resources needed to finally sow a scene here in Dunedin that we’ve been sorely lacking.