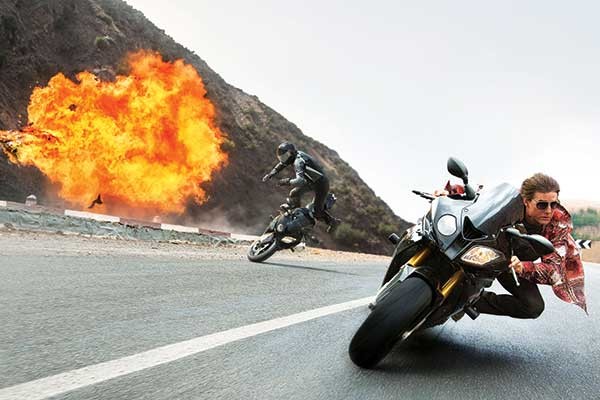 I never used to be a fan of the Mission: Impossible franchise. Maybe I was too young to appreciate it — or maybe I was jealous of Katie Holmes — but with Tom Cruise’s love of Scientology and his overwhelming arrogance, I don’t know why I’d have ever cared. However, as I’ve grown older and the movies have progressed, I’ve fallen in love — not with Tom Cruise, but with Mission: Impossible.

After an evaluation from the CIA, concerns are raised regarding the execution of missions and the destruction that the Impossible Mission Force (IMF), leaves in its wake. The team soon dissolves and, during their time of deposition, Ethan Hunt (Tom Cruise) is captured and taken to an undisclosed location where his captors intend to torture him for information. However, Ilsa Faust (Rebecca Ferguson), an undercover MI6 agent, saves his life and aids in his escape before returning to her boss under the pretense that Hunt escaped on his own.

Ethan, now estranged from his country and on the run from the CIA, undertakes his most impossible mission yet. For six months, he tracks Solomon Lane (Sean Harris), ex-MI6 agent and leader of the “Syndicate”, an organisation set on destroying the IMF. Without his team, Hunt is beaten by Lane at every turn, and eventually calls on some old agents for help.

The cast of Mission: Impossible — Rogue Nation offers the audiences impressive performances, and the chemistry between Ethan and one of his former colleagues, Benji Dunn (Simon Pegg), provides the audience with some amusing banter. Ethan’s brooding and sinister characteristics contrast well with Benji, who gives the audience excellent comic relief and some much-needed light-heartedness. Although the characters are well developed, the film has far too many plot twists. One is fine, two is unexpected and intriguing, but start playing around with too many and it becomes annoying.