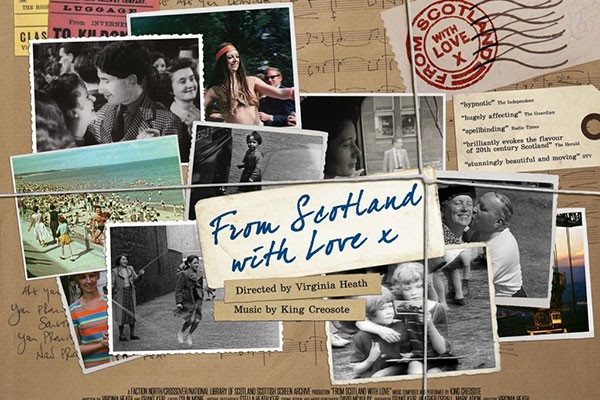 Director of "From Scotland with Love"

Critic: When going through all the Scottish film archives, did you have specific things in mind when choosing what you would use, and how did you know which footage to pick?

It was a fluid process. I wanted an overall theme of love and loss, which relates to a lot of things such as war, immigration, but also an industry — the shipbuilding industry — which is all gone now. Those were the overarching themes, but there were also themes of work, leisure, the struggle for rights and so forth. I knew that I wanted footage to cover those big themes; it was just a matter of going into the archives with that in mind.

Critic: What was the collaboration process like with King Creosote in terms of him creating the music that fits with the visuals you chose?

When we were commissioned to make the film, we were looking for the right composer. We chose King Creosote because we were impressed by his ability to not only compose wonderful music but also his lyrical ability. I felt that he would be a perfect person to help me tell the stories that I wanted to tell in the film. It was very much a collaborative process right from the start. As soon as I started researching the archives, I would show him little bits and pieces of imagery to give him ideas about songs.

After I’d done three months of archive research, I came up with a treatment where I broke the film down to 23 sequences. I gave him ideas for the mood and tone of the music that I wanted for each sequence and some of the key ideas, which gave him a template to work with. As we started editing, he and some of the other musicians went to a residential facility in Loch Fyne, where they started fleshing out the songs that Kenny [King Creosote] had come up with. As the film got more developed, we did a whole session of fine-tuning the music in relationship to the images, but it was never that the images had to dictate the music. Sometimes the music made me want to change the way I had cut a sequence.

Critic: As big an undertaking as it is to go through hundreds of hours of footage, do you think that by being guided by your themes of love and loss you felt the process could still go on fluidly and in the right amount of time before the 2014 Commonwealth Games?

Yes. I wrote a template treatment, which we needed to keep us on track, but part of the process of making a film like that is the excitement of actually figuring out how to piece together all of the images. I think one of the wonderful things about the film is the way in which we managed to bring out characters from the footage. We really wanted to make a history film and, as a woman filmmaker, I wanted to bring out women’s history. There’s lots of themes that are relevant today, and I think looking at ordinary people’s histories is something that is important to me.

Some friends of mine who are actors commented on the fact that they think it’s amazing how ordinary people can be fantastic actors. Ordinary people are just naturally great on screen, and I think we managed to bring that out in the material, which both King Creosote and I were proud of — he did it with the lyrics and I did it visually.

Critic: Some of your sequences focus on ordinary Scottish people leaving for America. In Dunedin, there’s a strong Scottish heritage. Did you consciously incorporate any personal connection between Scotland and New Zealand that you may have?

I have a personal connection between Scotland and New Zealand. I was born here and I currently live in Edinburgh. My grandmother was from north of Aberdeen, and she was one of those immigrants who left as a young woman and never went back to Scotland. Those scenes where people are leaving on the boats feel very emotional to me and quite personal. Even the other way around, I’m back in New Zealand now and I have a huge connection to this place, but for accidents and history, I’ve ended up living in Scotland. I think there’s a huge connection between Scotland and New Zealand.

Critic: In keeping with the theme of history playing out as if it were the present, do you think it’s possible for a similar film to be made about our lifetime 100 years from now?

I think it’s possible, but it would be tough because there would be so much more material. All the footage that I used was shot on film, which was a relatively expensive commodity back then. People thought quite carefully before they shot things, whereas with video and digital, people can shoot hours and hours of material for nothing. Also, where would all that be stored? There’s something about film, where people feel that they need to give it to an archive to look after. But, I suppose we’re all creating archives every day on our mobile phones. For someone to gather all of that together, that would be quite a huge task.