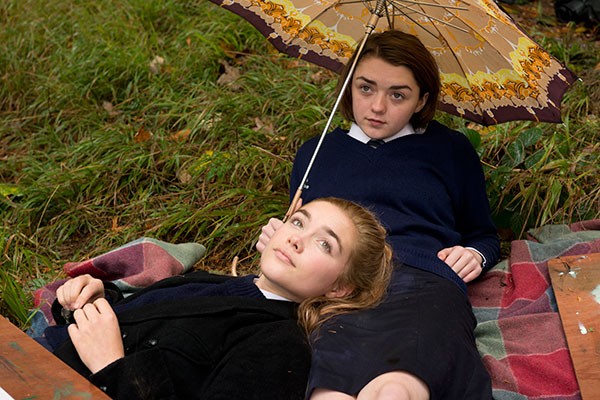 Following her heartbreaking docu-drama, Dreams of a Life, Carol Morley brings us The Falling — a bewitching, deadpan period portrait of female adolescence that explores the subject of mass psychogenic illness and treads into other dark territory. Although it is well-written and brimming with talent, The Falling suffers from questionable creative choices in direction, which hinders the audience’s experience as a whole.

Set in 1969, The Falling focuses on Lydia “Lamb” Lamont (Maisie Williams), a young girl who attends a strict all-girls school. Neglected by her agoraphobic mother (Maxine Peake), Lydia finds solace in her friendship with Abigail “Abbie” Mortimer (Florence Pugh). It’s a friendship that Lydia fixates on and, although Abbie assures her that the pair will always be close, the protagonist feels a distance slowly taking place, especially when Abbie begins to explore her sexuality. After the inexplicable death of a student, Lydia suffers from a fainting spell, which leads to an epidemic among the students and results in the protagonist trying to convince the school administration to take action.

Maisie Williams, best known for her role as Arya Stark on Game of Thrones, is incredible; she handles the role of troubled Lydia as if it were made for her and, through her body language, she effortlessly projects her character’s deterioration. Newcomer, Florence Pugh, proves herself as a promising talent, perfectly embodying the charismatic Abbie and delivering the most memorable line in the entire film (about the pulling-out method). The two actors share such rich chemistry on screen that their portrayal of their characters’ eccentric friendship becomes etched into our minds.

Despite impressive performances and the film’s beautiful cinematography, The Falling features too many blatantly symbolic shots of nature and has the editing of a TV movie. Also, the film’s soundtrack by Tracey Thorn was a puzzling choice as her musical scores were inconsistent in tone and created a confusing atmosphere.

Although The Falling is perplexing and demands additional viewing to fully grasp its narrative, Morley’s artistic direction isn’t captivating enough to warrant that and ultimately keeps the film from achieving its full potential.