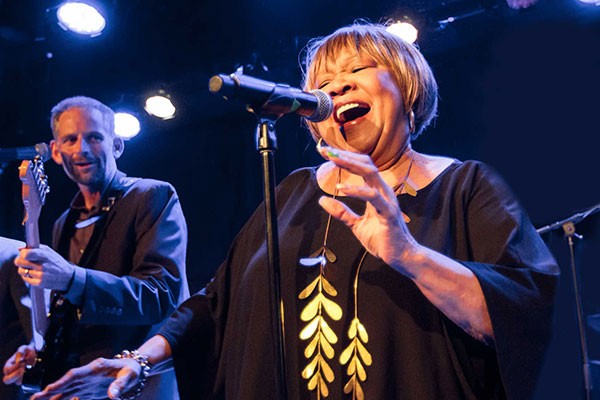 Mavis! is a documentary that pays tribute to the singing career of the lively and gregarious Mavis Staples, a civil rights activist, solo artist and lead singer of her family gospel group, The Staple Singers. The film seamlessly alternates specific moments in Mavis’s past with current interviews and footage of her recent performances. While the film centres on Mavis, it is also a documentary about her family and her relationship with her father, Roebuck “Pops” Staples.

With Pops’ artistic direction, The Staple Singers were not only musically but also socially progressive. Pops often mixed blues with gospel, which produced an original sound, and their lyrics promoted self-empowerment during the 1960s civil rights movement. Their eclectic sound and Mavis’s distinct voice attracted the attention of people such as Dr Martin Luther King, Bob Dylan (Mavis confessed that they once “smooched”), Prince and Bonnie Raitt. Through this documentary, Jessica Edwards shows the audience that it wasn’t just Mavis’s voice but also the support from her siblings, her father and the musical community that helped her thrive as a singer who still performs today.

Every year, the NZIFF weaves itself into the community with films that aren’t quite mainstream movie blockbusters, and a few films always elicit strong reactions for being sexually graphic, racist, violent, or for being all three of those things. But whether reactions are negative or positive, one goal is achieved — we are really made to think. While I initially viewed Mavis! as an odd choice for a preview screening, I soon began to realise that the music of The Staple Singers during the 1960s civil rights movement is not that different to the music and events of contemporary society. Instead of The Staple Singers, we have Kendrick Lamar’s To Pimp a Butterfly, which reflects the ongoing racial tension in the United States, where protests and uprisings have taken place over the unarmed killings of several African-American men, women and children.

Though this documentary wouldn’t be considered controversial, in 80 minutes Jessica Edwards effortlessly showcases the achievements of a passionate performer who states, “I’ll stop singing when I have nothing left to say, and you know, that ain’t gonna happen.” Mavis! may have initially been difficult for me to engage with, but this documentary provides laughter and a sense of ease, and gives the audience some unexpected but welcomed insight.