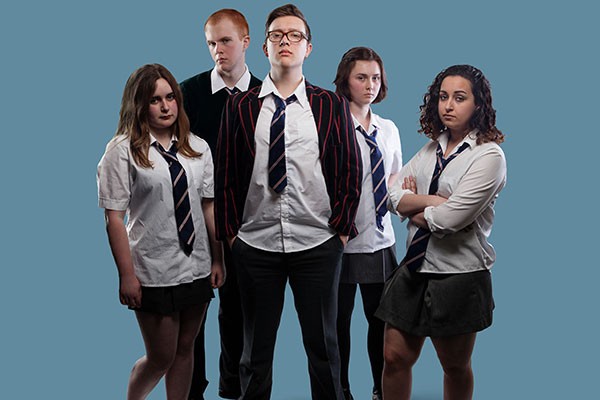 Teenagers are fascinating. As a “teacher’s pet” teenager myself, I was always engrossed in the tumultuous adventures of my peers. The lives of the adolescents portrayed in Punk Rock gave me an enjoyable glimpse back at those old adventures. One minute I would find myself experiencing fits of laughter — the next I was gripping my seat in pure terror.

Punk Rock is set at an English high school and revolves around the arrival of new student, Lily (Ripeka Templeton), and how her presence unsettles many existing student relationships. One student, in particular, develops a crush on Lily, and his inability to recognise her many sexual signals cleverly introduces one of the play’s central themes: the complexity and potentially destructive nature of teen relationships. Although the plot focuses on how Lily manages to shake the social foundations of those around her, the play also looks into other teenage interactions, like when Bennett the “bully” (Taylor Barrett) performs one of his many attacks on “nerd” Chadwick (Hamish Annan), forcing him to be covered in pink lipstick. These awkward, humorous, cringe-worthy and frightening adolescent experiences eventually take a dark and chilling turn — one that interrupts our growing attachments to the teenagers and offers the audience a complete whirlwind of emotions.

Punk Rock marks the first ever collaboration between the Fortune Theatre and the University of Otago Theatre Studies programme, with four theatre students starring alongside professional actors, as well as others undertaking backstage roles. While the dialogue was sometimes muffled and English accents were occasionally broken with Kiwi inflections, the quality of acting was professional — there were no “students” on stage, just actors.

With an impressive set and lighting design by Martyn Roberts, the school room was completed to perfection, down to the last solar system poster, pen marks on the roof and dirty school windows. For fear of ruining the surprise, I shall just say that the set contained much more than meets the eye — something that reveals the planned meticulousness and cohesiveness of this theatre production and amplifies the play as a whole.