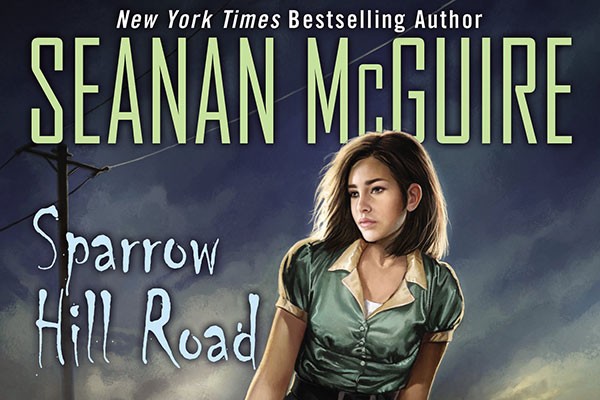 Sparrow Hill Road, by Seanan McGuire, is an urban fantasy story with horror elements. The narrator, Rose, died in the 1950s, murdered when she was just sixteen, and went on to become an urban legend to the living and a guide into the afterlife for the dead and dying. Bobby Cross, the undead man who killed her, still pursues her around America; his state of being is sustained by souls, and Rose is the only soul that ever got away from him. Over the decades of her afterlife, Rose becomes increasingly determined to end Bobby Cross’s unnatural existence, to save not only herself but countless others.

Rose is based on one of the more famous urban legends, “the girl in the prom dress” motif, which is a common subset of the larger “vanishing hitchhiker” category. In brief, a guy lets a girl wearing a prom dress hitch a ride, he gives her his coat to wear, she vanishes and the coat is found on a tombstone in the nearby cemetery. There are countless variations on this story, and even the tale about the coat is a removable sub-plot. I mention it because it’s one of the many cool things about McGuire’s world-building. When Rose is wearing a borrowed coat, she takes on life of a sort and can eat and be touched like a living human being. The afterlife as McGuire presents it is filled with interesting details (at one point Rose has to help kill a highway), but my favourite thing about Sparrow Hill Road is how it gives the reader a very vivid picture of what it might be like to be an urban legend.

Rose works to help the living escape death and the dead escape fates worse than death, but she doesn’t always succeed. Her narration is an excellent combination of down-to-earth practicality and weighty statements about the nature of life and death: “I died on a hot summer night in my junior year of high school, driven off the road by a man who should never have been there. My body was battered almost past recognition by the accident. My spirit fared a little better, sweet sixteen for the rest of time, missing the warm coat of life’s embrace. I was alive, and then I wasn’t. Someday, they’ll say the same thing about everyone. Someday, they’ll say the same thing about you.” She also manages to be a fundamentally good person, a hero who helps people without credulity-straining selflessness. Rose is amusing and tough and good company. As a main character and the soul and centre of this book, she’s almost all you could ask for.

The only real issue I have is that she calls men gentlemanly when they are disinclined to rape her, and presents a character who threatens to rape her as sympathetic simply because he’s dead, does not realise it and can’t find his girlfriend. These are circumstances that do not alleviate fundamentally unforgivable behaviour.

Sparrow Hill Road excels at conveying that atmosphere of late-night-truck-stop-romanticised-sordidness so unique to road trips. It’s immensely entertaining and often has a lot of imaginatively bad-ass fantasy concepts.