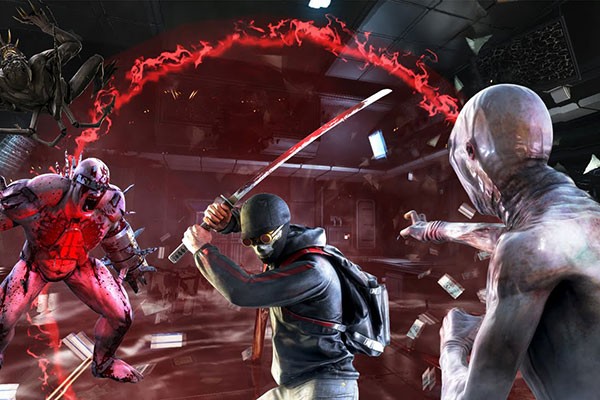 Much like the Targaryens, every time a game comes out on Steam’s Early Access, the gods flip a coin to determine whether it will be a success or doomed to fail. For every Minecraft, we have dozens of titles that remain stuck in development hell, and therefore you should be sceptical when people try to hype up Early Access games. Fortunately for fans of the original Killing Floor, KF2 (so far) seems to be the former rather than the latter.

For the uninitiated, Killing Floor 2 is the 2015 sequel to the popular 2009 co-op first-person shooter by Tripwire Interactive — the same gun nuts who brought you Red Orchestra and Red Orchestra 2. The objective, much as the name suggests, is for you and up to five other players to survive increasingly difficult waves of “zeds” (bioweapons gone rogue) by setting up a killing floor. This involves welding doors shut to funnel zeds into as few pathways as possible so you can efficiently dispatch them. Between each wave, you have a brief reprieve to run around the map to look for ammo and to use your hard-earned dosh to purchase weapons and armour from the trader. Each wave gradually introduces more and more different zed types: starting with the cannon fodder Clots, whose sole job is to eat bullets and grab you if they get too close and progressing to the chainsaw-wielding Scrake, who will wipe entire teams if left unchecked. And just when you think you’ve gotten a handle on things, the game ends with a boss wave against a submachine-gun-toting cyborg Nazi. Let it never be said that Tripwire produces uninspired games.

Going against the grain of a lot of conventional first-person shooters where a single player can dominate a match, in Killing Floor 2 you’re only ever as good as the weakest player on your team. Because of this emphasis on cooperation, each player can choose from the four currently available “perks” (with six more en route). Each “perk” acts as an archetype or a class, with its own strengths and weaknesses. Assault-rifle-wielding commandos specialise in cleaning up the low-level cannon fodder zeds that will try to swarm you and provide a utility role in seeing enemy health bars and spotting cloaked zeds. The shovel-swinging Berserker excels in getting up close and personal, using superior survivability to parry hits from bigger zeds and stand its ground — buying valuable time for everyone else to focus their fire. Supports excel at bringing down bigger zeds with a fistful of buckshot and can give ammo to everyone else, and the self-explanatory Field Medic keeps everyone hale and hearty with sci-fi-inspired guns and healing grenades. Each perk gives the player a specific task to do amid the chaos, and as each perk levels up (through killing, healing, welding, etc), you get to specialise further by choosing between two different skills every five levels (although you can change perks and skills after every wave to encourage flexibility).

Where Killing Floor 2 really excels is in how satisfying every part of the gameplay is; even the reload animations have a lot of realism and detail put into them — Tripwire used motion-capture footage of soldiers and special-forces operators firing and reloading guns to get every detail perfect. One of the skills, “Tactical Reload”, not only speeds up the time it takes for you to reload a gun but changes the animations completely to be more streamlined and efficient. Regardless of what perk you are playing, you always feel rewarded for playing well, whether that is timing a perfect parry against a Scrake or firing a healing dart to save a teammate. The guns could sound a bit meatier, but each has a nice kick when fired and feels satisfying, especially when you’re in the slow-motion “zed time” and lining up headshots.

While it is difficult to fully review a game that has only about 40 percent of the planned content available, what content is available is well polished but could use a bit more balancing. Because of Tripwire’s fantastic track record as a developer — constantly updating its games with free content long after release — I have little doubt that Killing Floor 2 will shape up to be one of the best multiplayer games of the year, especially when all the perks are added in.