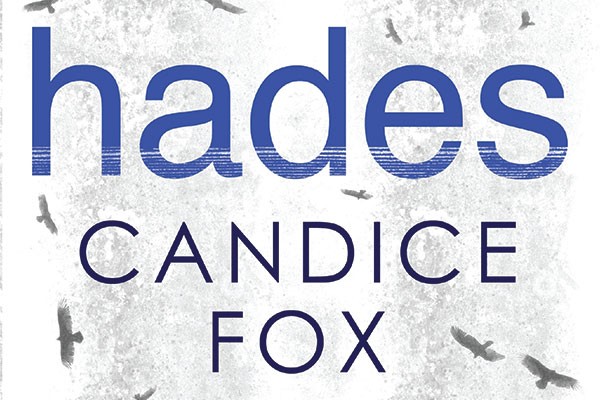 Hades is Candice Fox’s first novel. Fox tells the story of homicide detective Frank Bennett, who has just been professionally partnered with Eden Archer, a woman who has some serious secrets. The novel is set in Australia and alternates between Frank and Eden’s investigation of a killer who is harvesting organs and the story of Eden’s upbringing by the titular Hades. Hades lives in a shack on the outskirts of a garbage heap and has made a career of disposing of various things for criminals, including dead bodies. When a client arrives with two children he and his gang have failed to actually kill, Hades slowly decides to raise them as his own. This childhood left Eden rather strange and, as the two work together, Frank begins to have suspicions about his new partner.

The point of view in Hades starts off switching between flashback scenes written in third-person italics about Eden’s childhood and Frank’s first-person narration. It isn’t until chapter four that there’s a scene in non-italicised third person from the point of view of the organ harvester. I found that sudden shake-up of an established structure rather jarring, which is a shame because otherwise Hades is well-written from a purely technical standpoint. Also, for reasons I will never understand, crime novels and thrillers are one of those genres where writers often feel free to over-write. Fox doesn’t do that all. I actually read her descriptive passages without ever wondering “Why am I being told this?” That is a rare and valuable gift.

This book’s tagline is “What does it take to raise two perfect little killers?”, which implies that Hades is specifically raising Eden and her brother to be murderers. He’s not. (They do become murderers, which isn’t a spoiler because that’s the tagline. You’re clearly getting murder-children here.) Hades doesn’t have the most stellar morals, but he’s also not stoked about his children becoming murderous vigilantes. He tries to prevent it. And the sections from Hades’ point of view state Eden and her brother would have been normal if their parents hadn’t been killed. I don’t buy it.

Then there’s the organ harvester. He believes that the weak should be purged from the human race, yet he’s going around murdering healthy people to sell their organs to sick people. I think the contradiction there is apparent. And apparently he intently studies his potential clients before approaching them, learning everything from their moral character to their extended family, but also doesn’t check whether they have enough money to afford his services. Still, it’s necessary to think a lot about a book to review it, but not so much to read it. If you like your thrillers reasonably competent and don’t mind a touch of implausibility, go to it.