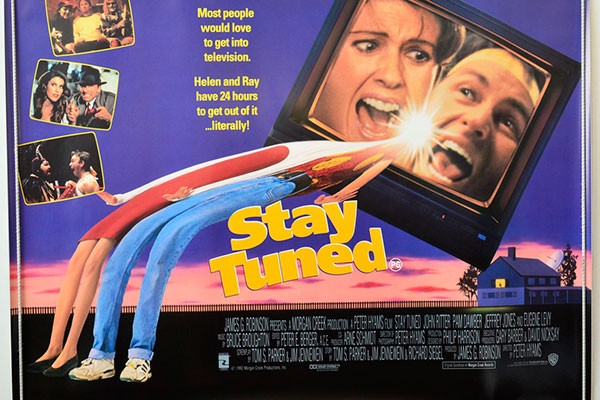 Stay Tuned is an imaginative, entertaining and weirdly under-appreciated family comedy that answers the question we all pondered as kids: “What would happen if I could go inside my TV and participate in all of the shows?”

Turns out it wouldn’t be so great, especially if your TV set was sold to you by Satan.

Roy and Helen Knables, a married couple played by Pam Dawber and the late John Ritter, are sucked into their magical TV set, which Ritter’s character unwittingly bought from a demonic salesman called Spike (Jeffrey Jones). To escape, Roy and Helen must survive a gauntlet of twisted, hell-themed versions of their favourite TV shows, including a sadistic game show, an abnormally violent western and plenty of nods to 90s television and movies — hey, at least they don’t have to deal with Geordie Shore. To succeed, they get outside help from their kids, Darryl (David Tom) and Diane (Heather McComb).

The plot has that almost Spielbergian vibe shared by other ﬁlms of the era, with relatable suburban characters having supernatural adventures; however, Stay Tuned packs a satirical punch. The screenwriters, Tom Parker and Jim Jennewein, previously worked as ad copywriters — and judging from the plot, the pair were a bit disillusioned with the television industry.

In addition to the sharp satire, Stay Tuned has cool visual effects and there are some pretty hilarious breaking-the-fourth-wall moments in the final scene. The two leads are amiable screen presences who carry the film well. Sadly, some sequences drag on a bit and the supporting characters are mostly forgettable; the kids are one-dimensional as their son is a nerdy dweeb and their daughter is a cheerleader. I’m normally a Eugene Levy fan (the dad from American Pie) but his character, Crowley, is completely superﬂuous to the storyline — presumably only existing because the director wanted Eugene Levy in the film.

The premise, humour and warm 90s nostalgia of Stay Tuned are enough to make the film work though. Not least because of the pop culture references — the parody TV shows include Fresh Prince of Darkness, Three Men and Rosemary’s Baby and Dwayne’s Underworld.