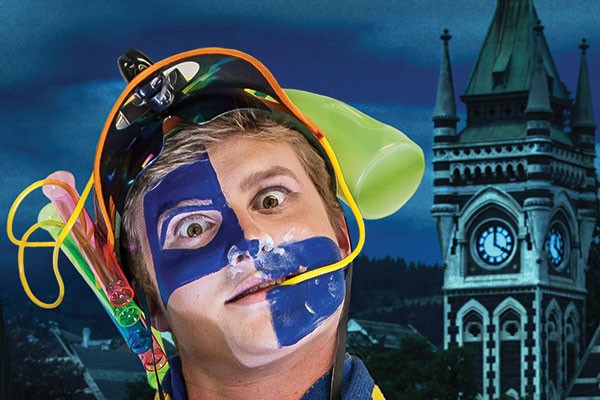 As a seasoned attendee of The Capping Show (seasoned may be a little too generous a term — I’ve only been to three), I was expecting big things. If the renowned humour associated with the comic event failed to brighten the gloomy pit in which I am currently residing, I was not going to be a happy camper. Upon entering the auditorium, I was greeted with the soulful sounds of 8am Lecture. Like a few shots of cheap vodka, their upbeat and entertaining melodies helped me to forget the woes of my life as a finalist and definitely went down a lot smoother than any Smirnoff ever could. The performance from the band foreshadowed what was to come — a night of laughter, amusement and wicked entertainment.

Campus Watch: The Capping Show 2015 follows the life of Campus Watch extraordinaires, Sharon (Jana Polglase) and Bruce (Alex Martyn), as they go undercover in the line of duty. Confronted with the absurd predicament of having all the water on campus switched out for beer, Bruce and Sharon go on a mission to find the culprit and restore order and sobriety to the university. Posing as students, they discover the people responsible for the crimes — personified versions of Dunedin’s favourite student bar, the Cook. With the help of other bars such as Gardies, Metro and Monkey (which are unfortunately forever lost to us), the vengeful Cook brothers endeavour to turn the world into one massive, eternally drunken party as payback.

The show’s main storyline was interspersed with unrelated, yet cleverly written sketches that almost always elicited laughter from the audience. My personal favourites were the Urban Animals sketch, where a faux David Attenborough shared his knowledge of the freshers spawned from each first year hall, and the ANZ Bank Heist, which encouraged interaction with the audience and got us all out of our seats. The eagerly anticipated performances by Sexytet and Sextet did not disappoint, and each group had the audience laughing with their clever, lyrically altered covers. The 87th annual Selwyn Ballet also made an amusing appearance, with a brilliantly choreographed piece that was surprisingly aptly executed by the boys themselves.

However, the politically correct side of me was shaking its head at the Ebola skits, and especially at the sketch concerning Germanwings Flight 9525 — too soon, guys. In saying that, without a little disagreeable humour, it wouldn’t be The Capping Show now, would it?

This year’s Capping Show exhibited some excellent comedy, and with a talented cast, there is no doubt that their upcoming performances will be just as impressive as their opening night.