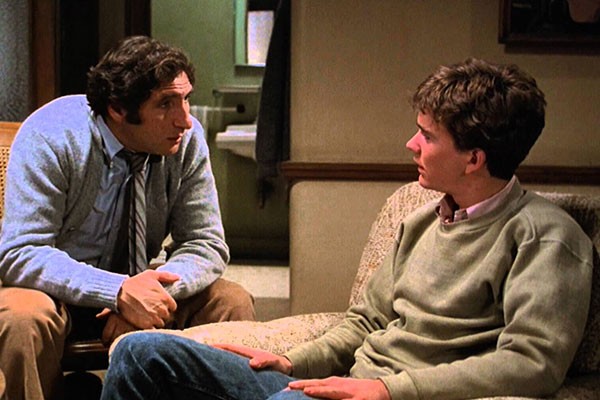 In a somewhat Kanye West-esque fashion, Ordinary People is also known as the “movie that robbed Raging Bull of its Best Picture Oscar” and it’s a shame that this has become a big part of the film’s reputation. I haven’t seen Raging Bull, so I can’t compare the two; however, Ordinary People is one hell of a powerful, quietly heart-wrenching drama that deserves its high accolades.

The ﬁlm examines family dysfunction and the process of recovering from mental illness. Ordinary People follows the Jarretts — an afﬂuent Chicago family whose oldest son has recently died in a boating accident. The younger son, Conrad (Timothy Hutton), survived the accident and is now plagued by guilt and post-traumatic stress. After a failed suicide attempt, Conrad is sent to the straight-talking, dry-humoured therapist, Dr. Berger, played by Judd Hirsch. Conrad doesn’t take to therapy right away, but after he endures further tragedies, combined with the regular tribulations of high school, he starts to beneﬁt from his therapist’s wisdom; Dr Berger tells Conrad that “if you can’t feel pain, then you’re not going to feel anything else either”.

Donald Sutherland plays Conrad’s concerned dad, Calvin, while Mary Tyler Moore plays Conrad’s status-conscious mother, Beth — a particularly unlikeable character. Beth is often preoccupied with shiny surfaces and the squeaky-clean family facade, which causes her to resent Conrad for threatening it with all his pesky psychological problems. She is a victim of her circumstances to an extent but proves to be a destructive force — the most highly charged drama comes in the scenes where she clashes with the other members of the family. The drama is further heightened by the film’s seemingly idyllic backdrop of mansions, a leafy well-kept suburbia, golf courses and the like.

There are some cheesy moments, and the ﬁlmmaking style sometimes feels a little bit dated. Fortunately, the writing and the performances are strong enough to transcend the occasional 80s daytime soap opera atmosphere.

Ordinary People has a life-afﬁrming quality that is hard not to be affected by.