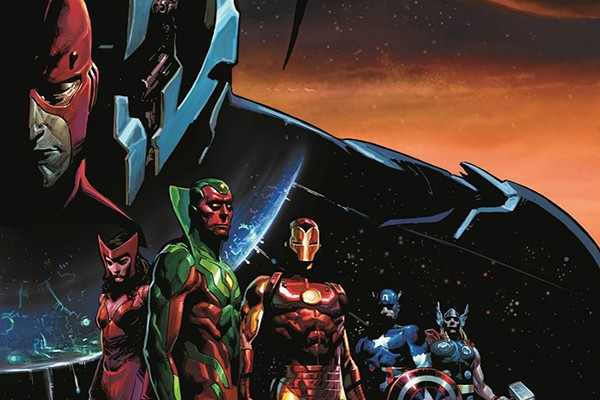 The first fifth of the book is dedicated to backstory, covering ground that’s been heavily-trodden. Thankfully, this isn’t as tedious as it sounds. Remender manages to knock out an endearingly faithful rendition of 80s-esque superhero dialogue without weighing the pages down with exposition. It’s a solid entry point, especially for casual or new comic book readers, with a cast of well-known faces such as Captain America, Iron Man and Beast, among other legacy Marvel characters. It doesn’t ask a lot of you, just that you push through the more confusing areas of implied backstory.

At the core of Rage is the relationship between Ultron and his creator or “father”, Hank Pym, and to a lesser degree another father-son relationship between Ultron and his creation, the Vision, a less murder-y android. Unfortunately, this relationship doesn’t always ring true, forcing strange hypocrisies into the mix. For a world full of gods and souls, Pym sure likes to tell the reader that there are no gods or souls. Also there’s a weird, unexplained conflict between Pym’s assertions that Ultron is an AI and statements about Ultron being his child. It feels like Remender is trying to make a symbolic statement here, but any revelation about the humanity of complex AI is lost to the noise around it.

This isn’t the first or the fifth time Ultron has threatened Earth’s Mightiest Heroes, but Rage of Ultron offers some deep insights into Hank Pym (or as Tony Stark describes him, “self-doubt personified”), his insecurities and his longing to prove himself to his peers. Watching him force out words that carry much more confidence than the man behind them is one of the most interesting components of Rage, and hits much harder than any grand, sweeping gesture in the story’s climax. Pym has struggled with depression, anxiety and identity issues in the past (Pym’s two most well-known actions are creating an “unemotional” murderbot and beating his wife). As such, it actually feels genuinely empowering to see this broken, regretful man take control in an attempt to develop as a person.

The plot itself, Ultron’s ploy to take over all life in the universe, is duller than it sounds and almost feels like an afterthought. The stakes are suddenly so high that it’s hard to really care about them. The character interactions are infinitely more interesting than watching the Avengers beat down robot after robot or Ultron becoming insanely powerful.

Fortunately, even if there weren’t a word in the book, the art is jaw-dropping. Opeña and Remender frequently collaborate, and clearly have a solid rhythm and consistent tone (even if that tone is usually “oh shit, the world’s ending, we’re all screwed”). Nobody ever looks lifeless, every character looks full of power, pain or speed. Earth’s Mightiest Heroes are even realistically proportioned (relatively, anyway).

Rage of Ultron is a fairly balanced book, full of interesting characters but lacking in plot direction. The climax is charged with emotion instead of just pure action, which is great to see as cape comics often get caught up in their own spectacle. It’s a solid 3 out of 5, but could swing heavily in either direction depending on the reader’s inclination towards story or art, plot or character.