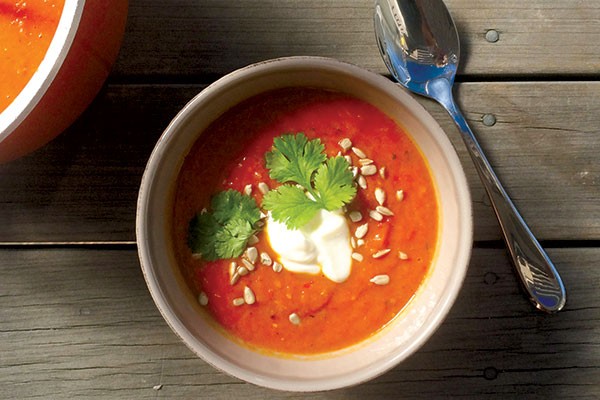 It’s that time of year again when the electric blankets come out, the hot water bottles get cradled in lectures and your washing takes a week to dry. Soup starts to become a viable option for most meals as your bank balances become as miserable as the weather.

When I was scrounging a free meal from my parents,my mum packed me off with a box of this soup to have for lunch. It was absolutely delicious. This soup is a fantastic way to make the most of the cheap tomatoes in season at the moment. It also doesn’t taste anything like your regular tomato soup (probably because it has pumpkin and a capsicum in it too). Mum got the original recipe from Dish magazine (issue 59), but I have loosely adapted it to fit my own impoverished needs. The original method says to remove the tomato skins once roasted; I think this is a mighty waste of nutrition so please don’t do it.

Preheat the oven to 180 degrees on bake. Line a large roasting dish with baking paper. Microwave the pumpkin half until it becomes soft enough to slice off the skin and to chop into small chunks.