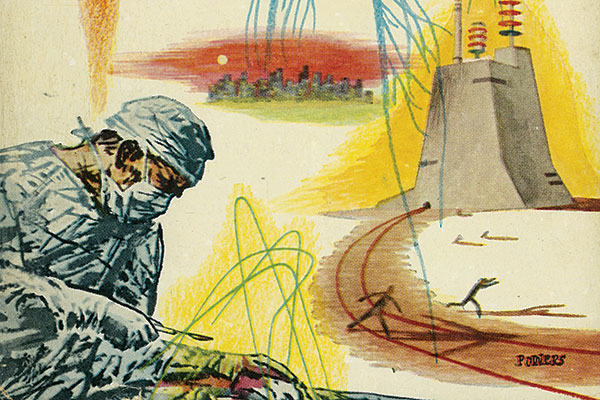 On the first poster that catches my eye as I enter the room, a blonde woman disinterestedly adjusts the strange, alien-gun weapon she is holding. The red swimsuit that adorns her toned body looks like a beast has clawed at it; it doesn’t cover much — in fact, it almost looks like a red tiger stripe painted on her skin (perhaps she is a rather lustily drawn alien). Behind her, a terrifying beast, not of this planet, moves through the dark towards its prey. This blown up, reproduced cover for the science fiction book, The Lion’s Game by James H. Schmitz, is one of twelve displayed on the wall by the entrance to the de Beer Gallery — an often overlooked space on the first floor of Central Library that hosts interesting and informative exhibitions from the University’s Special Collections.

Diagonal to The Lion’s Game, is another book cover, which depicts a woman in an impossibly small golden bikini warrior outfit, boldly posed as she wields her sword in front of a horse. This time, the book is The Golden Sword written by Janet E. Morris, part of a series that challenged the fantasy and science fiction community with its powerful female protagonist, pansexual characters and questions about sexuality and abuse of power.

These interesting, bizarre posters are only a small sample of Harold Terrence Salive’s (1939 –2012) extensive science fiction and fantasy collection. Salive’s avid following of science fiction and fantasy began in his teens and continued fervently throughout his life. In between collecting, Salive graduated with a PhD in experimental psychology from the University of Michigan and he and his family moved to Auckland to lecture. This collection, officially titled the Hal Salive Science Fiction and Fantasy Collection, was donated to the university’s Special Collections in 2013 by his second wife, Rachel Salive.

Moving away from the posters and the (slightly gimmicky, but what did you expect) Star Trek transporting platform on the floor, the viewer enters a delightfully displayed world (or several worlds) of fantasy, fiction, erotica, action and humour. Aliens, Androids & Unicorns provides insight into, and excitement for, Salive’s passion. The exhibition features books, correspondence to and from Salive, manuscripts and more, all carefully curated in display cabinets arranged throughout the space as well as in layers of drawers beneath the cabinets. Included in the show are works by some of the world’s most famous and popular science fiction authors, like Samuel Delany Alfred van Vogt, and fantasy authors, Poul Anderson and C.J. Cherryh (after whom asteroid 77185 Cherryh was named due to her work).

Each display has small paragraphs of either relevant stories about the object or snippets of Harold Salive’s life and character, making the show feel both more accessible for the non-expert viewer and personal. In one display, for example, the information outlines Salive’s avid interest in science fiction: Salive regarded his reading of science fiction as one of the most important activities of his life. Accordingly to family reports, when courting his second wife and visiting her parents, he would stress the importance of science fiction by pointedly sitting “reading” right in front of them so they knew from the outset who they were getting as a son-in-law.

Aliens, Androids & Unicorns is unlike exhibitions one would find at galleries like the Dunedin Public Art Gallery — there is no original “art” on display and no single artist has created work for this show. However, the material on display along with the wonderful snippets that paint a narrative of a passionate collector is entertaining, enlightening, a little bit perverted and very, very quirky.
This article first appeared in Issue 7, 2015.
Posted 2:51pm Sunday 12th April 2015 by Loulou Callister-Baker.