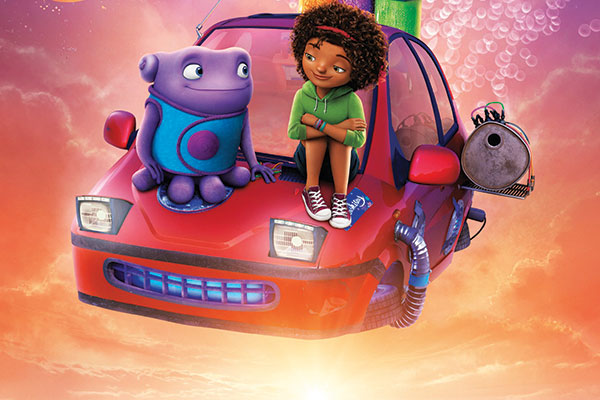 If there’s one thing that films such as The Incredibles and The Iron Giant have taught me, it’s that animated movies can hold their own as great standalone films. Home does not qualify for this. The film bites its own tail when it forces inconsistent satirical metaphor into its story and, in the process, accentuates the poor quality of the script.

Following the destruction of their original planet at the hands of the tyrannical Gorg, a race of aliens known as the Boov decide to invade and inhabit Earth. All humans are shipped off to Australia and are forced to live in reconstructed reserve towns. When the eccentric yet inept Oh (Jim Parsons) accidentally sends a party invite to the whole universe (including the Gorg), he becomes a fugitive and is forced to go on the run. He teams up with invasion survivor and human, Tip (Rihanna), and the pair stop the invite reaching the Gorg and also find Tip’s kidnapped mother, Lucy (Jennifer Lopez).

While the voice acting of Parsons and Rihanna is top-notch, the poor dialogue and extremely unoriginal slapstick humour littered through the film bring it down. Also, for a family-friendly film, the idea of the Boov shifting everyone into ghettos seems dark; this point is further accentuated when it is referred to as “befriending and liberating”, which also brings into question political points concerning American foreign policy. I just felt confused as to what exactly the film was attempting to discuss, as none of these issues were resolved. However, I must praise the diversity of the humans that appear, as not only was the protagonist a POC, but the supporting cast of humans was culturally diverse.

Home is a visually stunning attempt to overcomplicate an unoriginal premise and market it to a younger audience in the hopes that no one will catch onto the satirical and serious elements it fails to address. It’s another Dreamworks film that I do not expect to be remembered more than a year or so from now.
This article first appeared in Issue 6, 2015.
Posted 3:11pm Sunday 29th March 2015 by Shaun Swain.