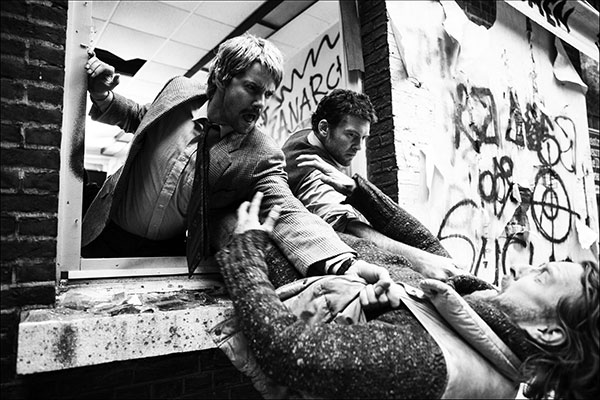 Films “based on a true story,” especially ones about kidnap heists, usually fit into one of two categories. Category one: documentary footage that is so intensely dramatised that it becomes almost fictitious. Category two: documentary footage that sticks diligently to historical fact and becomes a narrative documentary. Kidnapping Mr. Heineken, however, somehow fits between these two ends of the spectrum by dramatising the facts that seem false and downplaying any fabrications that actually seem factual. In the process however, the film misses the mark in several ways.

The film is set in 1983 and tells the story of several childhood friends committing the titular kidnapping of the heir of the Heineken beer empire, one of the richest men in the world at the time, which results in the largest ransom ever paid. The film attempts to sell itself as a deconstruction of the heist genre by showing the gritty truth of what it means to “get away with it.” However, few liberties are taken with crime journalist, Peter De Vries’, source material on the event, and any thematic elements in the story fall short when they are restricted by the open-endedness of reality.

The film is well acted, but most of the “well” comes from Anthony Hopkins as Freddy Heineken, who is infinitely more charismatic than his captors Willem Holleeder (Sam Worthington) and Cor van Hout (Jim Sturgess), stealing the show from them whenever he appears. This is not to say that Worthington and Sturgess perform badly but rather that their shifting American/Australian/British accents tend to throw off any consistency in their characterisation, creating something of a mess.

Kidnapping Mr. Heineken is average at best. Despite how much this film tries to be something different or revolutionary for the genre, it is just another typical kidnap heist film. With that said, and bearing in mind its loyalty to the source material, Kidnapping Mr. Heineken provides a fair amount of historical insight, but really is just another action thriller to slot in with all the rest.
This article first appeared in Issue 5, 2015.
Posted 5:43pm Sunday 22nd March 2015 by Shaun Swain.